The legacy of Ilse Zilversmit; mourning the passing of Councillor Kovac's mom

Ruth Kovac has spent three decades as one of the City of Côte Saint-Luc`s very devoted members of council. At public events, she would seldomly be seen without her mother Ilse Zilversmit by her side.

Ilse passed away on June 23 at 90 years of age. She was a terrific woman and right up until her final days, before being hospitalized for a cancer that had reached the critical stage, she lived on her own in a condominium and remained very self-sufficient. 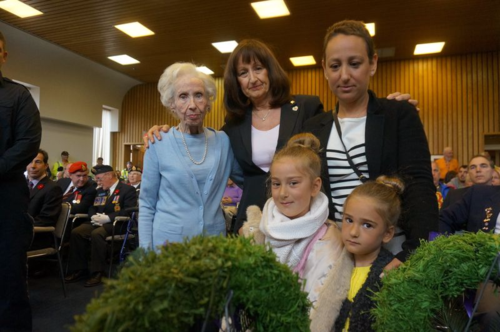 Ilse Zilversmit (left) with her daughter Ruth, granddaughter and great grandchildren, in this photo taken less than two months ago.

Ilse was a Holocaust survivor. Her family home in Amsterdam became a refuge for Jews fleeing Nazi Germany, as early as 1934. As a teenager in 1943, she and her family were deported to the Westerbork transit camp. In February 1944, she was again deported - along with her family- to the Bergen-Belsen camp in Germany. She came to Canada and with her husband Gunther, whom she met in a camp, and raised three children.

Ilse  lived in the same Amsterdam neighbourhood as perhaps the best-known of those names, Anne Frank. Their parents knew each other; Zilversmit and her sister were around the same age as Anne and her older sister. Ilse and her family have another thing in common with the Franks – they were also sent to Bergen-Belsen. Her father was killed there, but she survived along with her mother and sister. “I'm the lucky one, I have six great grand-children,” she said in an interview just two years ago.

In an interview with the Canadian Jewish News in 2010, Ilse elaborated upon her connection to Anne Frank. “Anne was a nice girl, but a little, I wouldn’t say wild, let’s say energetic,” she said “while her older sister was very serious. We spoke to them at Bergen-Belsen, but couldn’t see them because there were two rows of barbed wire with straw in between. Anne asked if there was anyone from Holland, and then when we answered, if we had any food. We found some bread and threw it over, but someone else grabbed it first. Those were the last words we had with them.”

I always enjoyed my conversations with Ilse. She followed current events very closely and was naturally very proud of her daughter the politician. It was just over a month ago that Ilse came to City Hall with Ruth,  her granddaughter and great grandchildren  for our annual VE (Victory in Europe) Day, where the three generations lay a wreath. A few days later she joined Ruth at the Yom Hashoah ceremony.

"Before we took her to the hospital for the final time I came to her condo and she had the TV on her favorite channel, CNN," said Ruth. "She told me to take care of her plants. My dad passed away 29 years ago. So mom lived nearly one-third of her life as a widow. She lived a good life."

Here is a video Ilse recorded for the Montreal Holocaust Memorial Centre a number of years ago.   It is a stunning story, one that will live on for many generations to learn. The legacy of Ilse Zilversmit.