I was pleased to attend the second annual presentation of the D’Arcy-McGee Citizenship Medals on June 20 at the Côte-Saint-Luc Aquatic and Community Centre.

Three winners of this National Assembly medal were recognized for having touched and enriched the lives of riding residents through their community engagement. The selections were made by a blue-ribbon jury composed of three former D’Arcy-McGee MNAs: Justice Herbert Marx, Lawrence S. Bergman and Robert Libman. 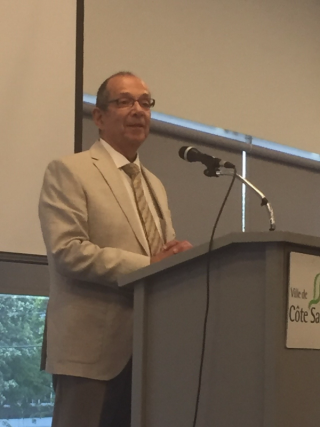 At the event, an inaugural winner of the Victor Goldbloom “Vivre ensemble” essay contest was announced. The prize, a tribute to the former MNA, Minister and Official Languages Commissioner who passed away earlier this year, will now be bestowed annually on a Secondary IV or V student studying in the riding.

“I’m privileged to serve a riding population that consistently distinguishes itself by its community involvement, compassion and leadership,” said present-day D’Arcy McGee Liberal MNA David Birnbaum. “We are all beneficiaries of this dedication.” 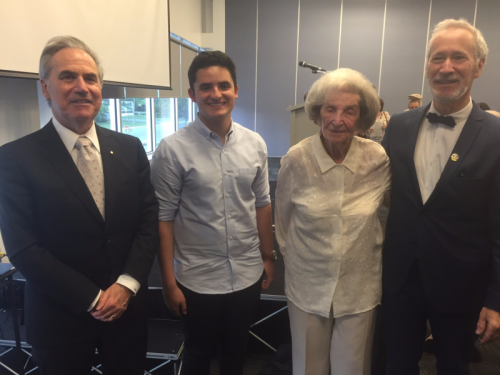 The winners were Dr. Mark A. Wainberg, Ian M. Solloway and Liselotte Ivry of Côte Saint-Luc. They were honored before friends, family and guests for lifetime achievement in serving their fellow residents and beyond.

For the first time, an additional medal was presented to the winner of the Victor Goldbloom ‘‘Vivre Ensemble’’ Essay contest, open all Secondary IV and V students studying within the riding. Sheila Goldbloom was present for the presentation of the prize, in memory of the former provincial Minister and first MNA for D’Arcy-McGee, Victor Goldbloom. The essay winner, Ben Feldman, was selected by a jury composed of the current MNA, D'Arcy-McGee Liberal Association President Orna Hilberger, retired Professor and Association member Dorothy Zalcman-Howard and Michael Goldbloom, Victor’s son and Principal of Bishop’s University. Ben attends Hebrew Academy on Kellert Avenue.

A music ensemble from École secondaire Saint-Luc in the riding entertained the gathering with a wonderful medley of jazz tunes.

Among those present were the Minister responsible for Access to Information and the Reform of Democratic Institutions Rita Di Santis, federal MP for the Mount-Royal riding Anthony Housefather, Hampstead Mayor William Steinberg and members of our council.

“There is such a rich tradition of volunteer and community leadership in this riding,” noted Birnbaum. “I am pleased and proud to have instituted a National Assembly medals program that allows us to recognize those in the D’Arcy-McGee riding who have given so much back in service of their fellow residents. Today’s three winners exemplify that spirit of community and public service.”

Wainberg, of course, is a world leader in advancing treatment for, and awareness of, AIDS and HIV. His research and collaboration have helped save millions of lives around the world. He was on business in Kenya and unable to attend. His colleague at the Jewish General Hospital, Councillor Glenn J. Nashen, accepted the award on his behalf.

Solloway is presently into the fifth decade of a remarkable career as a family law attorney. He has pleaded cases here and internationally. In addition, he wrote more than 650 judgments during three terms on the Commission d’appel sur la langue d’enseignement. In fact he was the first English-speaking member of that body. Ian also chaired the English-speaking section of the Montreal Bar for an unprecedented eight terms. Over the years he has also been integrally involved in the community.

“Ever since I was a child growing up, community has been important to me,” Solloway said in his acceptance speech. “My uncle was former Côte Saint-Luc Mayor Sam Moskovitch. I always believed that giving back to a community is not just a duty, but a privilege.”

Ivry is a Holocaust survivor who has shared her message of hope and remembrance with hundreds of Quebec children of all origins and backgrounds. Her mother and brother perished at Auschwitz. She was finally liberated from Bergen-Belsen in 1945 at the age of 19 and built a new life in Montreal. Professionally, she was an art teacher. In 2007 she published “I’m Their Voice,” a compilation of letters, poems and drawings from the students whose classes she visited over the years. “I believe we are all here on earth to accomplish a mission,” she said. “Mine is to speak on behalf of the six million Jews who cannot do so themselves.”

As for Feldman, 16, here is excerpt from his winning essay. “On July 6, 2013 a train carrying oil failed to brake properly and started rolling down the tracks towards a Quebec town. When this horrible explosion occurred, Federation CJA raised just over $100,000 for the people of Lac Mégantic along with Dr. Victor Goldbloom. The inhabitants of Lac-Mégantic did not understand why the Jewish community of Montreal was helping them and that is exactly where Vivre Ensemble comes into play. The few people who went there representing Montreal Jews explained that their morals and purpose was to help others, and as the people of Lac-Mégantic needed help, so that is why they came."

Posted at 12:42 AM in Awards, Quebec government, Tributes | Permalink | Comments (0)