Côte Saint-Luc native Harold Heft, who died from a brain tumour last summer, was one great human being. His wife Suzanne, two sons and mom Ruby were at Kirwan Park on May 22 for a the first Harold Heft Memorial Softball Game. Unfortunately I had a family commitment and could not attend. My brother Chuck and mom Elaine were on hand though. I thank Suzanne for this wonderful summary below.
By Suzanne Heft
Thank you for making a donation to the Harold Heft Memorial Softball Game in Cote St Luc in support of paediatric cardiology research at the Montreal Children's Hospital. The game was yesterday. And thanks to Steve Abrams for so kindly (and superbly) organizing this event.
Years ago, Harold and I established this fund in honour of Harold's parents, Ruby and Eddie, on their 50th wedding anniversary, and when Steve approached me about the idea of organizing this game so that some of Harold's Montreal friends could gather in his name, it seemed like a great idea to be able to direct some philanthropy to the Children's in Harold's memory.
I am happy to tell you that together we raised over $3,000. MCH saved Harold's life when he was 10 and he was forever grateful. Thanks to everyone who made a donation.
If you didn't get a chance, here is the link to make a gift: https://childrenfoundation.com/fundraiser/harold-heft-memorial-softball-game/
On behalf of our family and all the sick kids that are helped each year by the Montreal Children's Hospital, thank you for your generosity.
Thanks also for sharing a special day with my sons and giving them something remarkable to remember. 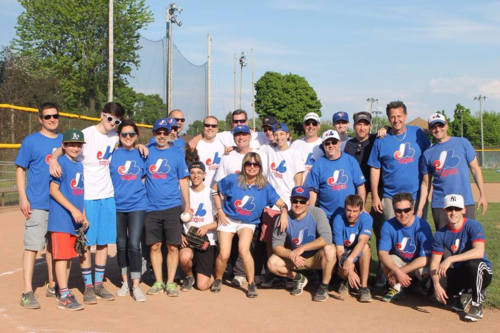 Harold`s friends and family - remembering Harold and his beloved Expos.
As you all know, Harold loved baseball, was loyal to his friends and also believed in the power of one person to make a difference in the world. In fact, he embodied that idea better than almost anyone I have ever met.
For those who couldn't make it to the game, but donated anyway, thank you. You were missed, but with us 'in spirit'! I hope you enjoy the attached photos. There are more on Facebook.
Finally, years ago, Harold published a piece in the National Post about the importance of August 12, 1994 - what he called 'the saddest day in baseball', the start of the strike that ended it all for the Expos. It was published on the 10-year anniversary of that day, and I think it holds up pretty well, even another decade later. Here it is: Download Harold Heft National Post Story
Enjoy.
Have a great summer, everyone & be well.
Warmest regards,
Suzanne Heft