The annual Yom Hashoah (Holocaust remembrance) commemoration organized by The Montreal Holocaust Memorial Centre (MHMC) is always an extraordinarily well put together and touching evening. This year’s May 4 edition at the Tifereth Beth David Jerusalem Congregation on Baily Road in Côte-Saint-Luc was no different.

The theme of this year’s ceremony was the struggle and ability to rebuild lives after the genocide. Through video testimony, Holocaust survivors shared memories of their post-war battle to move forward and begin their lives anew. In addition, these survivors and their descendants lit six candles in representation of the six million Jews murdered during the Holocaust. 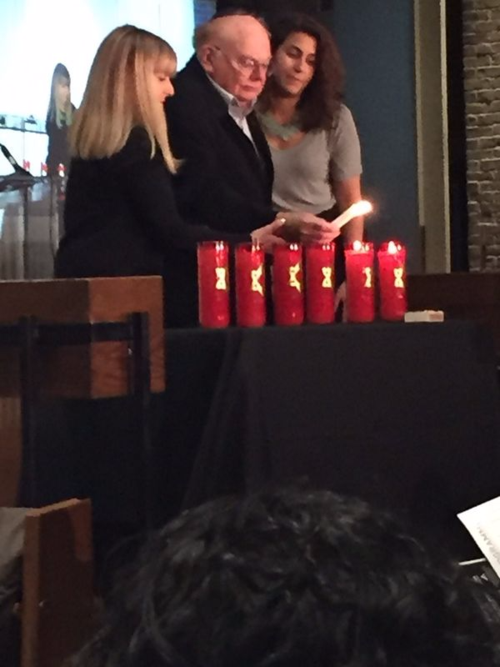 The Montreal-based survivors participating as speakers and candle-lighters this year were Leon Celemencki (born in France, who survived in hiding with his uncle and in various orphanages), Guta Fleising (born in Poland, survived the Warsaw Ghetto, Majdanek, Auschwitz, Ravensbruck, and Malchow camps, and multiple Death Marches), Willie Glaser (born in Germany, survived the war in Great Britain), Yetti Glasman (born in Romania, survived by posing as a German nanny and farmhand), Rena Schondorf (born in Poland, survived the Krakow Ghetto, and Plaszow, Birkenau, Bergen-Belsen, and Salzwedel camps) and Marcel Tenenbaum (born in Brussels, survived two years hiding in an attic and imprisonment at the Mechelen (Malines) transit camp. 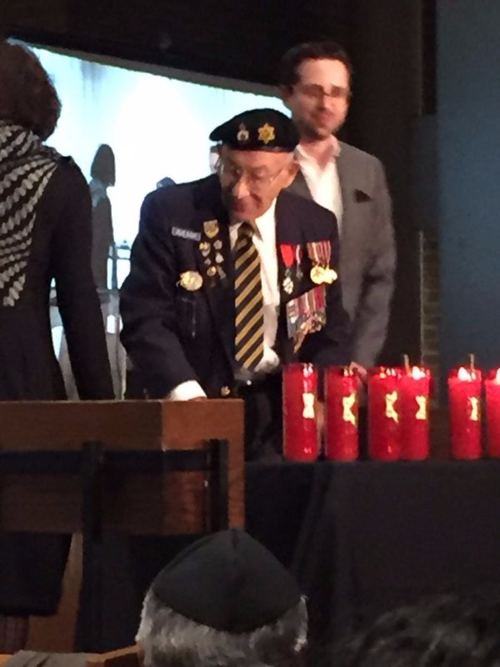 At 95 Willie Glaser is full of energy.

We are so fortunate to still have these survivors among us. Their stories are chilling. It provides a stark reminder of what cold blooded murderers the Nazis were and how remarkable it is that these individuals came to Canada and rebuild their lives. They are first asked to come to the stage and then, along with the audience, watch their video testimony. Thank goodness the MHMC undertook this important project for these interviews will be invaluable for generations to come.

Judith Nemes Black and Joyce Rappaport co-chair the event committee. Rappaport noted how 40,000 people who survived the Holocaust came to Canada, including 9,000 to Montreal. “Some felt welcomed,” she said, “and some were ignored and shunned by the general population. The impact of surviving the Holocaust can never be erased.”

Posted at 12:08 AM in Holocaust Remembrance | Permalink | Comments (1)

Less than a year after we were notified about the planned closure of  Manoire Montefiore, an upscale private kosher seniors' residence on Mackle and Cavendish in  Côte Saint-Luc, comes the stunning news that the Castel Royal Retirement residence will suffer the same fate.

Residents and their families were told today by officials from Chartwell Retirement Residences that the  250-suite retirement home located at 5740 Cavendish Boulevard will cease operation effective May 3, 2017. This affects approximately 157 residents and 75 employees. It is too early to speculate what the building will be used for in the future. "We bought this site in 2006 and continued to invest in it over the last decade in the hopes of offering high quality and respectful Jewish retirement living to the seniors of Côte Saint-Luc," wrote Karen Sullivan, Chief Operating Officer, Chartwell Retirement Residences. "However, over time, and despite significant investments in capital initiatives, we have continued to be plagued by a number of major maintenance issues in this building, from ongoing plumbing and water pipe issues that frequently cause flooding and water damage, to aged ventilation, elevator and electrical systems that have frequent break-downs and that we struggle to find replacement parts for."

Ms. Sullivan said that Chartwell  deeply regrets the impact of this decision to the residents, their loved ones and their staff. She said they will be working with all impacted individuals to support and assist them through this transition. Every effort will be undertaken to assist residents with their move to the retirement residence of their choice, including nearby Jewish retirement residences, and all moving details, from locating an alternate residence, to packing and unpacking as well as transportation of personal items, will be managed by a reputable seniors relocation company at no cost. Staff will also be supported with this transition with fair severance packages consistent with union agreements and years of service as well as the possibility of transfer to alternate Chartwell residences.

We appreciate the fact that Chartwell is providing this one year's notice. But it is very sad for the residents, staff and our community.

Is Econofitness moving into the Quartier Cavendish?

It appears as if the Quartier Cavendish has finally found a tenant for the former Bureau en Gros.

When first you do not succeed, then try again. Original plans called for the Multi Club Cavendish to move there. They were located at the nearby Cavendish Club For some reason that did not occur. They did vacate their premises, allowing the West End Gym to relocate from the Côte Saint-Luc Shopping Centre. 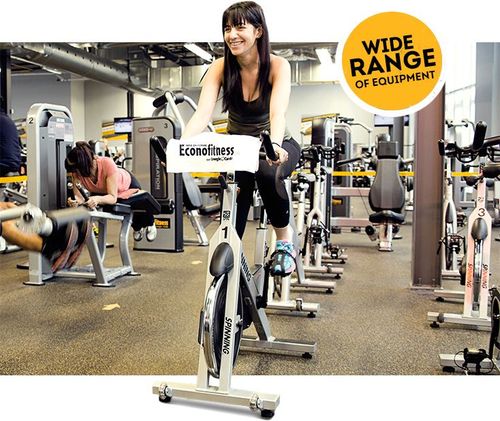 Now we learn that the Econofitness change will take the large space, where stationary and office supplies used to be available.  Operated by Énergie Cardio, Econofitness advertises that it charges only $10 a month or $120 a year with no hidden fees. Read the fine print as platinum and platinum plus memberships bring the price up. For platinum plus, you can actually enable friends and family to join for free. However, one of these individuals at a time can use the membership key card.

I have not been able to connect with Quartier Cavendish officials to get more details. 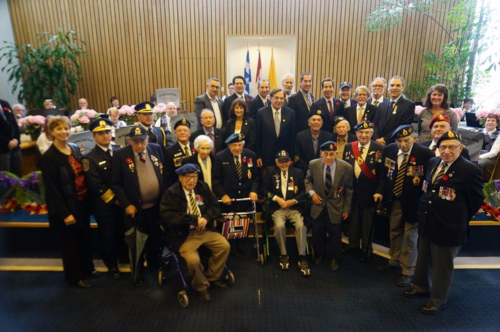 Veterans and dignitaries. I am third from the top left.

The annual Victory in Europe (V-E) Day commemoration in the City of Côte Saint-Luc took place on Sunday, May 1. Due to inclement weather we could not have it at Veterans Park, so we moved it inside to the Council Chamber for a very dignified and well run ceremony, which highlight the 71st anniversary of the liberation of Europe from the armed forces of Nazi Germany, on May 8, 1945. 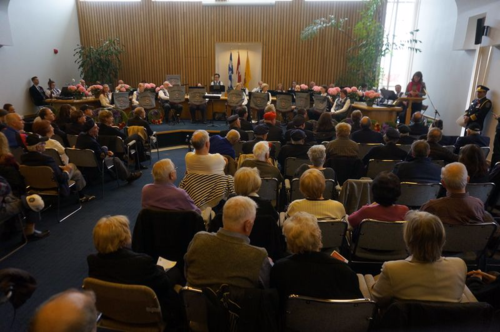 The room was crowded, but with very few young people.

In attendance were members of the Brigadier Frederick Kisch Branch 97 of the Royal Canadian Legion, Mayor Mitchell Brownstein, our entire city council, Hampstead Mayor William Steinberg, Mount Royal Liberal MP Anthony Housefather, D’Arcy McGee Liberal MNA David Birnbaum and members of the diplomatic corps. The room was full, but with the exception of the relatives of some of the veterans and others in the room the lack of youth in attendance was once again very evident. This was an exercise of authentic learning. We still have veterans who fought for this country among us. I spoke to many of my colleagues after the event, notably Councillor Allan J. Levine. He is our liaison with the Legion. His late dad was a veteran. Allan was a school teacher.

“If the students do not come to us, we must go to them,” Allan stated. 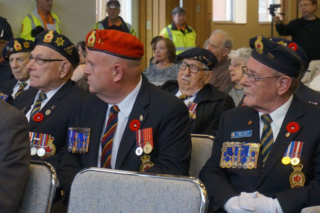 Some of our vets.

My colleague, Councillor Glenn J. Nashen, brought his nearly seven year old son Jeremy to the event. Jeremy is a sharp kid and he knew exactly what this ceremony was about. It does not hurt that his grandfather George Nashen is a veteran.

Councillor Ruth Kovac was there with her mom, Ilse Zilversmit, 89, a survivor of the Holocaust. They laid a wreath along with Ruth’s daughter Debra and her two little girls. Housefather noted how this was his first time speaking at this event as one of 338 Members of Parliament who now decide whether to send our troops off to war. He spoke proudly of his government is giving more funding to veterans’ hospitals and to soldiers who suffer from post-traumatic stress disorder upon returning from action.

MNA Birnbaum linked this ceremony to Yom Hashoah, the annual Holocaust Remembrance Day and the annual commemoration which will take place on Wednesday, May 4 at the Tifereth Beth David Jerusalem Congregation in CSL. The Quebec government formally acknowledges this day thanks to the actions of Birnbaum’s predecessor Lawrence Bergman, who was also in the room. 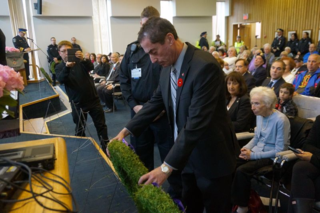 Mayor Brownstein noted how the veterans who fought for our country “are our heroes, which is why we mark VE Day each year.

Mary Eileen Earl from the United States Consulate made quite the presentation. She told us that she volunteered to represent her country at this event. Why? It turns out that she was a lieutenant colonel in the United States Marine Corps, who now works as a Foreign Service officer. “I have served my country since the age of 17,” she said. “Canada is my 13th country.” 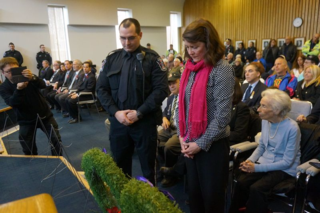 Mary Eileen Earl from the US Consulate.

Congratulations to our staff, notably Laura Trihas and Jordy Reichson, for putting together a first class event. We will reconvene for Remembrance Day on November 11 at the cenotaph at Veterans Park, which honours the memory of those who gave their lives in the First World War, the Second World War and the Korean War. Veterans Park is located next to the Bernard Lang Civic Centre, 5801 Cavendish Blvd.

A nice reception was held after the program.

To see all of the photos taken by our Darryl Levine click here.