David Birnbaum, MNA for D'Arcy-McGee, has  announced the creation of the Victor Goldbloom Vivre Ensemble Essay Contest. Victor Goldbloom, the first MNA for D'Arcy-McGee, first Jewish Cabinet Minister in Quebec, first Minister of the Environment, passed away at the age of 92 earlier this year.  It was one of those deaths which, despite his age, had people saying "he really did leave us too soon." That is because he was so incredibly active on many dossiers  right up until his death. I was with him at a press conference in December against Bill 86, the proposed law aimed at abolishing school board elections. He was the main speaker.

Dr. Goldbloom  served as Canada's Commissioner of Official Languages. Dr. Goldbloom was a champion throughout his life of building bridges between English- and French-speaking communities and between those of diverse faiths. 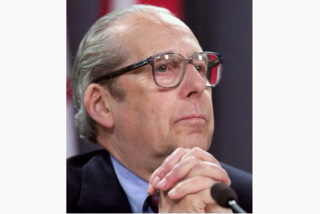 "It seems only fitting that we perpetuate Victor's tremendous legacy by inviting young people in the riding he represented to explore the principles of openness, compassion and understanding that so marked his life," noted Birnbaum, who presented the contest to area school principals at a meeting.

All Secondary IV and V students studying within the riding are invited to submit essays of no more than 700 words on the general theme of "Vivre ensemble." They are entirely free to choose their specific subject to address that theme. Entries can be submitted in English or French, and must include a single-paragraph summary in the second language. They must be received by Friday, June 3, 2016 at 4 p.m. at fran.gutman@assnat.qc.ca.

Birnbaum noted that a single winning entry will be chosen by a jury composed of the MNA, D'Arcy-McGee Liberal Association President Orna Hilberger and  retired Professor and Association member Dorothy Zalcman-Howard. They will be joined by Michael Goldbloom, Victor’s son and Principal of Bishop’s University.

“My father would have been very pleased to have his name given to this wonderful initiative. He wrote beautifully in both English and French and he loved his interactions with students,” Goldbloom noted. “From his first career as a pediatrician and throughout his public life, my Dad always sought to broaden understanding, bridge differences and help to make a better world. This essay competition is a thoughtful way of inviting young people to share that goal.”