School auditorium to be named after the late Syd Wise

Noted educator Syd Wise lost his battle with cancer last fall and he is already greatly missed.  For 21 years, until his passing, Syd served as an elected commissioner with the former Protestant School Board of Greater Montreal and the English Montreal School Board, representing Côte Saint-Luc and for his last year in office, Hampstead as well. 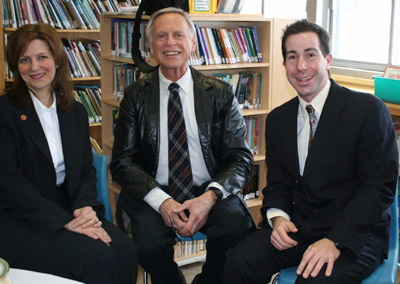 For many years Syd served as the Principal of the former Wagar High School. As the communications and marketing specialist for the EMSB,I developed a very close relationship with Syd. He wanted so badly to bring a mainstream public high school back to the former Wagar building, which now houses the Marymount Adult Education Centre and John Grant High School. It was not for a lack of trying on his part that it did not succeed.

Bernard Praw, who succeeded his good friend Syd as the commissioner via  a by-election in December, moved a motion at the last EMSB Council meeting to approve the Syd Wise Auditorium for the building which was so dear to him. A dedication ceremony with members of Syd`s family will be held at a date to be determined.

"Syd spent a lot of time on that very auditorium stage as a principal and even as a commissioner," said Praw. "It is a fitting tribute to a man we miss very much."

syd went above and beyond his work at the school board.....he was a fine gentleman....and is missed very much...