Mitchell Brownstein is the new mayor of CSL

I was at Côte Saint-Luc City Hall on the afternoon of March 11 to formally congratulate my long-time friend Mitchell Brownstein on being acclaimed as our new mayor.
Mayor Brownstein, who has served as a Côte Saint Luc councillor since 1990, was the only candidate to have submitted nomination papers before the close of the nomination period. 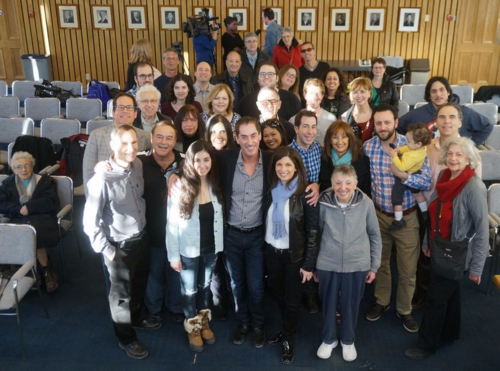 Celebrating Mayor Brownstein's acclamation.
"I am truly humbled by the outpouring of support from my colleagues and the residents of Côte Saint Luc over the last many months,” Mayor Brownstein said. “I am honoured to be returning to work on Monday as Mayor of Côte Saint Luc."
Brownstein will be sworn into office on Monday, March 14 at 8 pm as the first order of business at the Côte Saint-Luc council meeting at City Hall (5801 Cavendish Blvd.).
I go way back with Mitchell. But I recall clearly the days leading up to his entry into the political world. He started to attend council meetings. At the time I was covering city politics for the local community press and  I asked then District 7 Councillor Eric Helfield if he was planning to run in the next election. He told me that his plan was to retire, to which I responded, "Would you consider endorsing Mitchell Brownstein as your successor?"
Helfield asked to meet with Mitchell, whom he had started to see at city council meetings, and in no time at all deemed him his logical successor. Mitchell was a great fit for council from day one. While I watched the work at City Hall as a journalist and then as a communications consultant, I finally caught the political bug myself and in 2005 ran for council. In fact I followed Mitchell's recipe, approaching  former Councillor Harold Greenspon to ask if he'd back me to succeed him in District 4. He did and I won my first election with over 92 percent of the vote. I was acclaimed the last two times. It is hard to believe that municipal elections will surface again in November 2017.
I wish Mitchell and his first lady, Elaine Yagod, all the very best. He is a most worthy successor to Anthony Housefather, now doing an outstanding job as our Liberal Member of Parliament for Mount Royal.
We still do have a by-election on our hands. Four people have declared their candidacy to become the next councillor for District 4:  Sidney Benizri, Mitchell Kujavksy, Lloyd Pedvis and David Tordjman. Voters head to the polls on Sunday, April 10. Good luck to each of them!
See this report from Breakfast Television the morning of the acclamation. And this one from Global TV after Mitchell was acclaimed.
Mitchell Brownstein élu par acclamation à la mairie de Côte Saint-Luc

The perfect individual to build on Anthony's legacy!