At the March 14 Côte Saint-Luc council meeting, our  first under new Mayor Mitchell Brownstein, resident Bryan "Waffles" stepped to the microphone and suggested that we hold a meet the candidates meeting. While Mayor Brownstein was acclaimed to office, there are four people vying for his seat in District 7 - which borders my District 4.

B'nai Brith Canada (Quebec Region), which organized probably the best debate in the federal Mount Royal riding last summer, stepped up to the plate. In  a matter of days Executive Director Harvey Levine communicated with the mayor and members of council and scheduled the meetingt for Tuesday, March 29, 2016 from 7:30 pm to 9 pm in the  City Hall Harold Greenspon Auditorium (5801 Cavendish Blvd.).  I have run in three elections and we never had such a meeting. Hats off to Levine for taking such an initiative. This is a wonderful opportunity for voters in that district to get a better idea of whom to cast their vote in favor of. 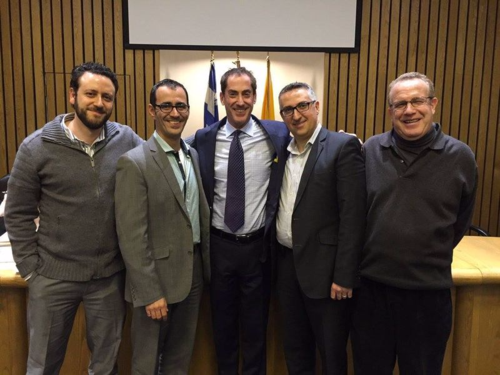 The four candidates in contention for a council seat are, in alphabetical order: Sidney Benizri, Mitch Kujavsky, Lloyd Pedvis, and David Tordjman. The candidates will make opening and closing remarks and each will answer questions from the moderator on relevant issues of concern to the district residents.

“The event will be co-moderated by myself” stated Levine, “and Steve Slimovitch, who is a criminal lawyer, President of the Lord Reading Law Society and board member of B'nai Brith Canada, League for Human Rights. Mr. Slimovitch is a former resident of Côte Saint-Luc and his parents still reside there.”

Mayor Brownstein will open the event. There will be closing remarks from Côte Saint-Luc resident Gerry Weinstein, who is Past President, B'nai Brith Canada and President of Residence B'nai Brith House and the soon to be built Chateau B'nai Brith -- both in Côte Saint-Luc.

Levine also stated “as an important part of the fabric of Côte Saint-Luc, B'nai Brith are happy to host this event. Our mission is to bring Canadian Jewry of all ages and backgrounds together by promoting human rights throughout the world, advocating for the security of the State of Israel and Jewish communities worldwide and providing local services through volunteer activities, cultivation of leadership and charitable work focusing on seniors and the less fortunate.”