Congratulations  to Jesse Shuster Leibner, a resident of Côte Saint-Luc`s District 2, who recently received  the Scarlet Key for leadership at McGill  University Jesse was also offered the Guy Drummond Fellowship as one of the top Political Science Honours students from the 2016 graduating class.  He intends to go to Paris for the  2016-17 academic year to pursue graduate studies at Europe's leading school in political science, Science Politiques, and then return to McGill to complete his Masters in Political Science. These activities are supported by the   Fellowship.  Before that, Jesse will be working this summer as the Economic and Trade Intern for the European Union in Ottawa. 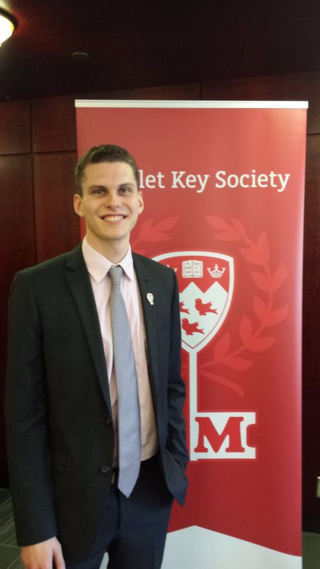 During his time at McGill, Jesse   has worked to create meaningful and enduring change in the university community. His positive experience working as a Research Assistant lead him to spearhead the creation of a data base of all the research opportunities in the Faculty of Arts in order to facilitate student access to these positions. While working as vice-president, Academic, of the Political Science Students Association, he worked with students and faculty to develop the first departmental level Assessment and Re-Read Policy. This  benefits both students and faculty by removing ambiguity and clarifying rules and· grading procedures. Under Jesse's leadership, the McGill Journal of Political Studies has been transformed into a peer reviewed publication, making it the first undergraduate journal to receive this distinction. Jesse also co-founded Effective Altruists at McGill, which aims to eradicate global poverty by directing funding to the most effective charities.

This year's winners include a wide range of student leaders who are entrepreneurs, politicians, social activists and much more. However, what they all have in common is that in a University known for its active student life, their exceptional commitment makes them stand out among their peers.