Longtime Côte Saint-Luc resident Tali Hazan has been operating Elite Laser in Westmount for 15 years now. Originally based on Greene Avenue, she relocated across the street to Westmount Square towards the end of 2015

While the primary vocation of Elite Laser has been laser hair removal and skin rejuvenation, the introduction of two salt therapy rooms has brought in an entirely new clientele. Hazan was inspired to do because of her 13 year old daughter, who suffers from Crohn`s Disease (Infammatory Bowel Disease).

“It was my brother who recommended I bring my daughter to a salt therapy room,” Hazan said. “He assured me it would help boost her immune system. I looked around and nothing like that existed here. I spoke to my husband and he said that we would just have to go ahead and build our own. So, when we relocated to Westmount Square we embarked on this project. It took eight months, but we achieved our goal. This has done wonders for my daughter. She used to be on antibiotics every winter. That has not been necessary once this year. And now we have so many new clients who are experiencing the same benefits.” 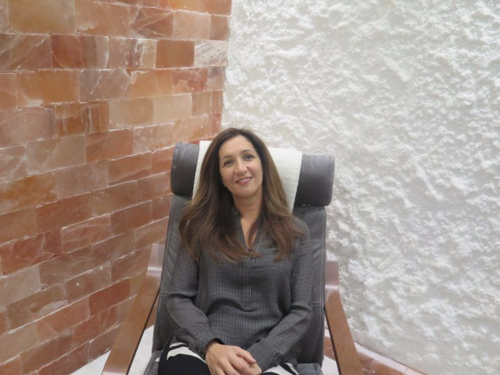 Tali Hazan in one of her salt therapy rooms.

Hazan said it took eight months to properly renovate her new premises. “We had to redo the walls and the ceilings,” she said. “We put in a brand new ventilation system because we must thin the air out after each session.”

I sat with Hazan in the actual salt therapy room earlier this week. Her location is impossible to miss, right next door to the Westmount Square Radiology Clinic. Parking is provided free of charge indoors for a minimum of a two hour stay.

If you suffer from respiratory conditions like asthma and allergies, as well as skin conditions such as psoriasis and eczema, Hazan says that the salt therapy rooms have proven to be a miracle for some people. It has even caught the eye of some prominent physicians who have been making site visits in recent weeks.

There is one salt room for adults and another for children. What you see when you walk in are walls covered with salt just like in the salt mines on one side and special Himalayan salt bricks on the other. In addition to being surrounded by their healing properties, halo or salt therapy is introduced. The dust from pharmaceutical-grade salt is easily inhaled and travels to the deepest parts of your sinuses and lungs, which is how you receive your treatment.

“The benefits of salt therapy were discovered in the mid-1800s,” Hazan said. “People would actually go to the salt mines to spend the night next to mining equipment just to get relief from their respiratory ailments.”

See what Doctor Oz has to say about it.

Hazan, who is a vibrant and lovely mother of three, says clients who experienced a session in the salt room have reported a feeling of intense calm and a major reduction in the symptoms that had previously been bothering them.
Hazan credits her husband Roger Choucroun for supporting the endeavor and her dedicated staff

Hazan invites interested individuals to visit Elite Laser by appointment to view the rooms and experience its benefits. Appointments are also easily booked by calling 514-925 -3338 or booking online at www.elitelaser.ca.  She is not closing the door to expansion, with the West Island being a distinct possibility.

Finally, here is an interesting report from NBC in Los Angeles.