Brownstein makes its official and launches his campaign for CSL Mayor

My friend and colleague Mitchell Brownstein formally resigned as a city councillor in Côte Saint-Luc effective Monday, February 8 at 11:59 p.m.  in order to run for mayor and allow for a concurrent by-election  for his District 7 seat.

Mitchell made the announcement at the start of our monthly council meeting and received a standing ovation from the large crowd on hand. Former mayor Anthony Housefather, now our Liberal Member of Parliament, was among those in attendance. 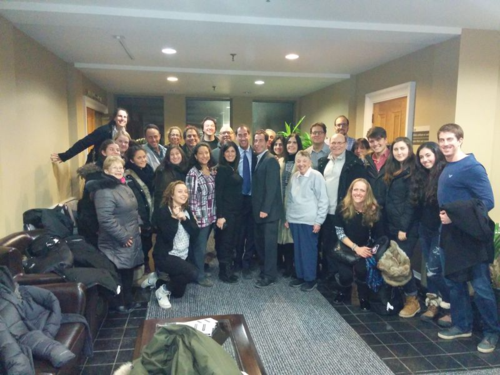 Mitchell, wife Elaine, Anthony Housefather and supporters after his announcement.

“As the only declared candidate for mayor who is supported by the entire city council of Côte Saint-Luc and Anthony Housefather,, I will be resigning as city councillor for District 7, ” declared  Councillor Brownstein. “ I am doing so despite not being required to resign until I file my nomination papers for mayor, which can only be done during the nomination period which will take place between February 26 to March 11. Although I would prefer to continue to serve and provide value to my fellow councillors for as long as possible, my early resignation will allow the City to have a concurrent by-election for District 7.  By holding the by-election for the new District 7 councillor at the same time as the by-election for mayor, the city will be spared the expense of holding two by-elections.  It will also allow our council to move forward as soon as possible with a new member of the team serving District 7.  This is the right thing to do.”

Councillor Brownstein   was first elected in 1990.  He has been an activist promoting issues of Canadian Unity, co-chairing the Côte Saint Luc Demerger Committee, advocating for Holocaust Remembrance, and opposing Bill 60, the PQ-proposed legislation on the charter of values.  He has held the portfolios of Public Works and Parks and Recreation, introduced the Fun Card providing access to CSL recreational facilities at an annual nominal fee, and established the Cöte Saint Luc Dramatic Society.  He actively participates in the programs and facilities the city has to offer regularly swimming in our pools and acting in the Dramatic Society productions. 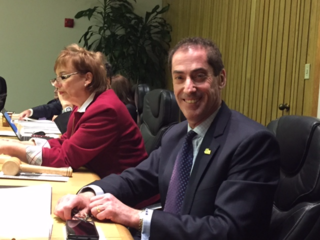 Mitchell at the meeting

More than 25 years ago, when I was covering Côte Saint-Luc City Hall for the community media, I urged him to consider a run for office. I even approached then Councillor Eric Helfield, whom I know was ready to step down, to see if he'd endorse Mitchell as his successor. He agreed to do so.

Former mayor Housefather and our entire council have thrown our support behind Mitchell. He is unquestionably the right man for the job, having been involved in virtually every important dossier this city has dealt with over the past quarter century. Mitchell has pledged to lighten his load at the law firm he runs with his brother Herb (and where his son Andrew now works) in order to become a full-time mayor.

Thus far Mitchell Kujavsky is the only person who has declared his candidacy for the city council seat in District 7.

The election is scheduled to take place on Sunday, April 10. Council got special permission from the Quebec government to delay the vote in order for Snowbirds to be able to take part.

For more information go to www.mitchellbrownstein.ca.