Cavendish extension gets some attention at Housefather consultation

There is no question about it. Mount Royal Liberal Member of Parliament Anthony Housefather has begun his first term in office no differently than his previous two decades in public office – as a man of the people.

On January 7 I attended a consultation meeting hosted by Anthony at the Irving L. Adessky Community Centre in Hampstead ahead of the Liberal government’s inaugural budget. 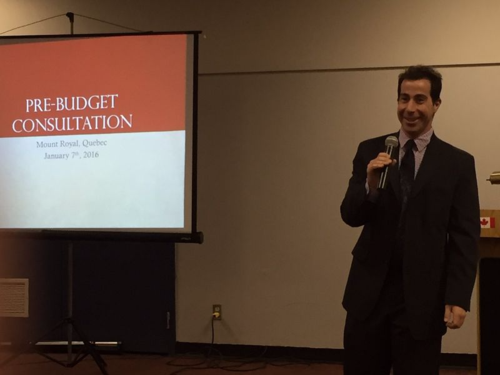 “As promised during the election campaign, I want to hold regular public meetings throughout the Mount Royal riding,” Anthony stated. “I am pleased that, as part of the new Liberal government’s commitment to openness and transparency, our Finance Minister, Bill Morneau, has shown a strong interest in receiving feedback from all Canadians.”

Anthony said that consultation meetings like this will allow him to solicit constituents’ opinions and relay the priorities for our riding.

Anthony plans to have quarterly Town Hall meetings. The next one will be on March 30 in Town of Mount Royal, followed by one in the summer in Côte des Neiges, a fall session in Côte Saint-Luc and back to Hampstead in the winter of 2017.

One of Prime Minister Justin Trudeau`s election pledges was to pour money into infrastructure programs across the country. Anthony wanted to hear from audience members as to what they thought some of the riding priorities might be such as roads, water rehabilitation, sewers and aqueducts or the extension of Cavendish Boulevard. Unquestionably the latter solicited the most interest. Côte Saint-Luc City Council is solidly behind such a project, which would be an indirect link from Cavendish via Royalmount in TMR and then reconnecting with Cavendish on the St. Laurent side. Anthony gave some history behind this issue, noting that former mayor Gerald Tremblay appeared to be backing the extension during the merger days. He backed off when the suburbs demerged, but it appears as if present-day Mayor Denis Coderre wants it to happen.

Anthony believes it will take about $44 million each from the federal, provincial and municipal governments to make this happen. He intends to advocate immediately for the federal government to commit for the project. Christopher Savard from D’Arcy McGee Liberal MNA David Birnbaum’s office was in attendance and listening attentively. And as Anthony reasoned, residents of the Côte des Neiges – NDG borough want this to happen before major development occurs on the former Blue Bonnets land.

I am more optimistic than ever that I will live to see the Cavendish extension become a reality. At the age of 53, I sure hope so.

Anthony`s team is now settled into its office in Montreal where Irwin Cotler and before him Sheila Finestone were based, at the corner of Kent and Victoria. His local staff consists of Bonnie Feigenbaum, Izabel Cujoz-Shulman and Sonny Moroz while Alex Gray and Ariel Shapiro oversee the Ottawa office. All of them except Gray were at the January 7 meeting.


“With respect to actions we have started to respond to immigration and other federal files in the constituency and very much appreciate the support of the provincial members offices who have given us good information and support,” said Anthony.

On the national side Anthony wants to advise constituents about the Canada Summer Job Program where applications are now being accepted until February 26. This is a program under which full time students between 15 and 30 can be hired by non-profits, governments such as municipalities and enterprises with 50 employees or less. For non-profits the federal government pays the full cost of minimum wage for the employee and for municipalities and small businesses they cover 50 percent. “We have doubled the program this year so should be able to hire twice as many students as last year and we have a right to establish local objectives to go along with national ones,” he said.

We are lucky to have a man like Anthony representing us in Ottawa.

It's a joke right ?
The Cavendish extension has been 'in the works' for almost four decades now... politicians promise & promise & promise - but people on the Cavendish mall side don't want traffic through their quiet streets.(that's the excuse). So, it has never happened.
The traffic on Cote Vertu has quadrupled because of this problem. (just in the last few years) I know because my family have been at the same location (on Cote Vertu) for 63 years now.

Thomas. I believe it will happen.