Over the years Remembrance Day ceremonies in Côte Saint-Luc have been held in the cold and sparsely attended. For this reason, we do a more elaborate program each May for VE (Victory Day in Europe).   Thanks to the initiative of our Director of Public Safety Jordy Reichson,  November 11, 2015 was a much different story.  First of all, the weather was far better than we can usually expect at this time of year. We also had a very solid attendance, bolstered by students from Bialik High School and Hebrew Academy. 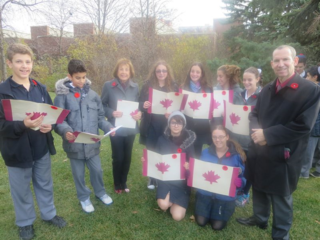 "We gather here in Veteran’s Park on Remembrance Day to honour the brave men and women who fought and who fell in the trenches, in the hospitals and on the blood-stained battlefields, in the defence of Canada and in the defence of freedom," said Mr. Reichson. "Those brave Canadians  gave up their lives and their innocence, so that we could live in a world of peace. The Great War, which ended just over 100 years ago, was dubbed the War to End all Wars. Sadly, it was not to be, as Canadian soldiers returned to the front lines in the Second World War, in the Korean War, in peacemaking and peacekeeping missions in the Balkans, in the Persian Gulf, in Cyprus, in Rwanda, in Somalia and most recently, in Afghanistan."

In reference to the students in attendance, Mr. Reichson noted, "this year, we welcome the students of two of our schools to join our Remembrance Day ceremony, for it is they, the children of today that will be the leaders of tomorrow. It is they, who will teach the stories of these veterans when there are none left to tell. It is they that may one day don the uniform, answer the call, and stand guard for the freedoms that we hold dear. To protect the society in which we are free to speak our minds, free to practice our religions, free to elect our leaders, and free to gather. These are not guaranteed universal freedoms, but ones that must be constantly protected and defended, by those who have served, those who continue to serve and those that will serve in the future." 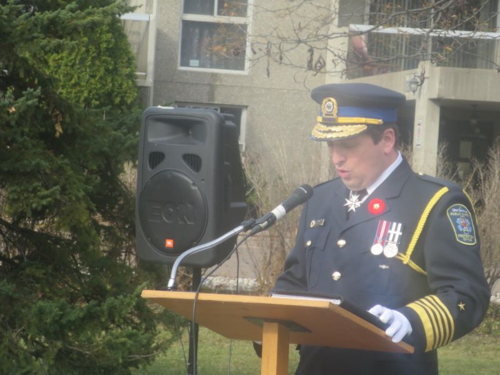 The Public Safety Honour Guard  marched in the colours and the Bialik High School choir sang  our national anthem, followed by the Last Post and two minutes of silence. The choir, guided by Lorna Smith, sang two more songs and a student from Hebrew Academy read  In Flander's Field. Montreal Police Station 9 Chief Jean O'Malley,  veteran Frank Levine of the Brigadier General Frederick Kisch Branch #97 recited the Act of Remembrance in French and English.  I joined Councillors Mitchell Brownstein, Ruth Kovac and Sam Goldbloom in laying a wreath as did others.

"The student involvement really made a major difference to the event," said Councillor Brownstein. "I had wonderful conversations with the students before the ceremony began.  They were very glad to participate and learned more than they could at school from their involvement.  Our efforts to provide an educational aspect to this event and others was very much appreciated." 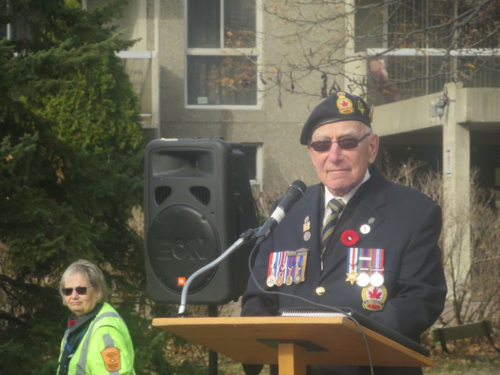 Added Councillor Kovac: "Remembrance day is solemn and a great occasion to teach the next generation."Councillor Levine, a former school teacher, was elated with the student involvement.