This was another great summer for Rembrandt Park in District 2.  Recent renovations have fully blossomed  and the park became rejuvenated and vibrant.

To those people who have approached me about repaving the outdoor basketball courts and possibly installing new lights for night play, that is being looked at by our Parks and Recreation Department.

The two new resurfaced tennis courts that were redone in the summer of 2014m  with the installation of the new court lighting system,  had players volleying well into the night up until closing hour at 11 pm. 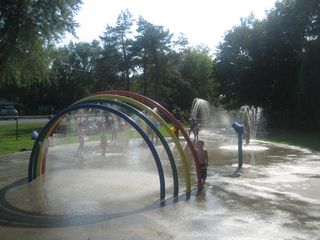 Last  August,  the Tournee Sports Experts was held at Rembrandt Park. This event was sponsored through Tennis Quebec and was open to children, teens, young adults and adult players in helping to bring awareness to interested participants in the sport of tennis a "lifelong" recreational sport. Certified instructors from Tennis Quebec demonstrated tips on playing, strategies tennis tactics in playing the game. There was a demonstration of some of the newest rackets by Wilson, Diadora and other tennis equipment outfitters. Participation was free of charge for this event, which is held annually at Rembrandt Park. The event attracted over 75 avid and enthusiastic tennis players.

During August staff began researching information on various possible amenities which could
be added to the tennis programs in 2015. We are presently looking at installing a practice
screen tennis net at Caldwell Tennis Courts. This would protect one court for teaching while not
disrupting play by the public on the other courts.

New signage for the public will be installed on the fences at Rembrandt Park tennis courts,
highlighting rules, regulations and City policy. This is being prepared at present for installation
before next season (2016) begins.

Of course, Rembrandt Park was also  the site of our first Piano in the Parks Program. We installed a donated piano so people could come play whenever they wish. The water splash area was well utilized by parents with their small children as were the swings and other equipment. It was nice to see so many families having picnics on the green space while others simply enjoyed sitting on the benches. Reuben Goodman continues to be our main attendant at the chalet, still well utilized for art classes.