Can we save the Famous Delly Boys Restaurant from closure?

A Côte Saint-Luc institution may be forced to close its doors for good by the end of October and I am wondering if there is anything we can do about it?

According to my sources, the landlord will not renew the lease of the Famous Delly Boys Restaurant on Westminster Avenue. There is even a potential new owner on the horizon, prepared to totally revamp the  place. His attempts to meet with the landlord have thus far been rejected.

The Delly Boys was originally established in 1962 by brothers Guido (Chico) and Sonny Broccoli. It has changed hands several times over the past decade, but continues to be incredibly popular. I have virtually grown up in the place and thought of Côte Saint-Luc`s only full-scale restaurant closing its doors reluctantly after being in business for 53 years breaks my heart.

People still come from across the island to enjoy their extensive menu, which contains such items as smoked meat and other deli delights, club rolls, their famous party sandwiches, pizza, pizza burgers, chicken, veal, fish, steak, ribs, pasta, salads and desserts. Whether dining in, taking out or ordering a catered meal, you will never be disappointed. I was unable to reach the landlord, Olymbec, today but I will continue to pursue them. 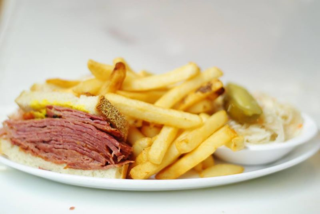 I do indeed hope they have a change in heart.  As for the potential new owner, I did ask him if there are other options to establish a CSL Deli. I always felt that the Cavendish Mall (now called Quartier Cavendish) would have been a better spot for them. In fact it almost happened after Pumperniks closed and its replacement Chilis turned out to be a bust. Some of the Mall owners had discussed a Delly Boys move, but the majority of the group opted in favor of a new concept called Sternz Rhapsody. It did not work, nor did its successor Jakes.

As the city councillor responsible for the Quartier Cavendish, I would love to play a role in bringing a full-scale restaurant there.  But for the good of our community, I still favor the status quo where Delly Boys is right now.

We would like Delly Boy's to stay open. They have great food, and fast service. Everyone is very pleasant there. Helen and Sam.

Oh no! How sad! This was my restaurant throughout my childhood. After Friday night skating, Edinburgh School lunches on recorder day, spaghetti a la Delly Boys and so many other memories.

WHAT A PITY. ANOTHER COTE SAINT LUC LANDMARK GONE.

This can't be true! Good ol' "Boys Delly" more commonly known as the "Famous Delly Boys" is a Cote St. Luc landmark institution (right fellow Wagar alumni?) and is truly worthy of heritage status!!
Wasn't good ol' Annie your favourite waitress (server) as well???
My incredible kids Adam and Erin wouldn't be who they are today without DB's famous Club Sandwiches and don't forget those wonderous Club Rolls!!
So Mike, I agree with you and challenge all Montrealers in Toronto and around the world... Now is the time to unite and speak up!!!!! Delly Boys forever... Plus a day!!
Amen!

Delay Boys cannot close. they are an institution. Best party sandwiched in the city!

I delivered in their famous blue vw as a teenager and that was in the late 60s. Such very fond memories. Of a great time in my life. I believe in institutions and their preservation. I now live in Florida and continue to cut my hair at gaetanos. 45 years of a friendship. Will he be next.

The Pizza Hut option is a good one.

It's the end of an era. My father Sonny, along with my uncle Chico, founded Delly Boys in 1962 before I was born. It was a huge part of my childhood and my father worked extremely hard and many long hours to make into a success. By 2007 I was almost glad to see it sold because it took so much out of my family... yet it's always been a source of pride. My dad still visited the restaurant after it sold, if only just to see his loyal customers. He is sad to see it disappear forever but such is life :( A massive thank you to all the people who fought for it to stay open.

Thank you to all the loyal customers, past and present, who kept Famous Delly Boys viable for 53 years. My father Sonny would want me to thank you all:)

Too bad Olymbec has dropped the ball...Today is the restaurant's last day in its current location. Fare well FDB. May you be reborn nearby soon!

As sister of Guido and Sonny bit is sad to see the restaurant go. My brothers worked day and night, making sacrifices to create such a great restaurant. It was a great part of my life and I feel so very sad to see it go. In its hey day it definitely was FAMOUS Delly Boys

Saving Delly Boys? After living in Cote St Luc for in excess of 45 years, it is not worth the effort!!!!

I just happen to walk the by the old place today, its already all boarded up with new for rent signs all over the windows.. was chatting with someone standing in the front of the place trying to look in the window who kind of told me the whole story about the closing of or FDB, all I can say is pretty sad to hear how the landlord treated them, Olymbec pretty much threw them out with out a reason at all, enforcing a 90 day we can throw you out clause..... the women I was talking too was also mentioning the Deli owners were pretty upset that not one person from the city of CSL even bothered to reach out to them when the word hit the street a couple of months ago, and she also mentioned that the place deserved some sort of write up for being in the community for 53 years and they got nothing from anyone, she says its because the Landlord is too well known and not even the Suburban ( our local weekly paper) wouldn't write even a small blurb on the place because they (olymbec) is an advertiser in the paper...again pretty disappointed of the paper. She hope that a new restaurant open there
but her understanding is that no restaurants will be allowed going forward, she feels sorry for all the people in the area old and young who loved the place because it was so easy to get to....

Delly Boys restaurant closed for no reason? Famous Delly Boys restaurant was taken over in 2014 by a greedy family who barely payed to their workers while enjoying several trips to Central Asia. Refusing to pay bills such as Hydro Quebec or Olymbec rent while renting expensive apartment in central downtown.

Paul Newman, a cook who worked 20+ years in Delly Boys, with a minimum salary of 10.50$ an hour, who went on Vacation 5 years ago... He didn't receive his salary for a month or his vacation money they suppose to pay him.

These people didn't even buy the restaurant. It was given to them by other family members who ran the place with an outstanding performance

Closed for no reason... Jesus.

I was thinking that it could have been a few of the new owners made changes that might not have gone over very well. Much like what happened with Uncle Willy's Buffet's in Vancouver when they became Franchised. New owners made changes and the regulars didn't like it and started not going back. Only one left now is Metrotown and it's the original owner who started it all.

I use to work with Sonny, alone with Derick, David and Gael the cook. Remember how Mr. Montangh would pour himself a cup off coffee and put sugar in it, get called away, go back to his coffee only to put more sugar in it.

Remember Bob behind the Counter.

Chico was the one who actually offered me the job and working with Sonny was just icing on the cake, he was great.

Delly Boys Restaurant had the best cheese bagels I've ever had. I don't know where I can find cheese bagels like that. I usually bring 2-3 dozens of them when I go to Toronto. My relatives over there love them. Its really sad that it closed.

It's heartwarming to read people's memories of Delly Boys, particularly of my father Sonny who passed away on 9 March 2016 at the age of 83. Just to let you know, he went back to visit Delly Boys in October 2015 to say goodbye and even though he was no longer the owner, seeing it closed for good broke his heart.

Deli Boys was my first job in the restaurant business, I was hired by Chico and worked under both brothers for 5 years. It was a great job which taught me how to cook, be desciplined and time management, I got to meet a lot of great coworkers as well as great customers. Since graduating from Concordia university I got married and eventually moved to Florida where my wife was originally from but for over 20 years every time we came back into montreal to visit my parents my first stop was always deli boys for a jumbo smoked meat sandwich. My kids got to see where I worked while attending university as well as meeting the owners I used to work for. This last visit back in August 2016 I was making my regular trip to deli boys for my regular smoked meat sandwich only to find it boarded up, I was shocked, stunned, and totally disappointed, and now after reading some of these other posts to find out that Sonny passed away is another blow.
I wish to give my condolences to the Broccoli family for the passing of Sonny and for the departure of the FDB
FAREWELL