Home Categories Posts by email Search
Work on Kildare and Cavendish to occur on October 27
Judy Roth Brook: a true angel has left this earth way too soon

Rabbi Steinmetz has served as the spiritual leader of TBDJ for 19 years. He will now become the Senior Rabbi of Kehilath Jeshurun, a distinguished and historic synagogue on Manhattan's Upper East Side. He will be succeeding one of the great leaders of the North American rabbinate, Rabbi Haskel Lookstein. “This appointment is both a great privilege and a great responsibility, and offers me the possibility of beginning a meaningful new chapter in my career,” he wrote to congregants.

Rabbi Steinmetz joined TBDJ in September 1996. Prior to that, he served congregations in Mount Vernon, New York, and Jersey City, New Jersey. He received his ordination from Yeshiva University, where he was a fellow of the elite Gruss Kollel Elyon. He has a M.A. in Jewish Philosophy from the Bernard Revel Graduate School, and a M.A. in Education from Adelphi University. He has completed Leadership Education and Development (L.E.A.D.) and Meorot Rabbinic fellowships. His articles have appeared in newspapers across the globe and he occupied numerous leadership positions in the community. 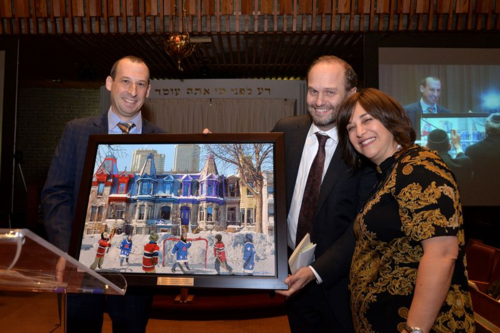 Greeted like a rock star at the farewell gathering, I did not get close enough to Rabbi Steinmetz to personally wish him well. So on this blog, which I am sure he will read, let me say to him what an incredible human being he is. I will miss you Rabbi more than words can say. You were always there to respond to a phone call or email, be it personal or business. We celebrated our own family simchas with you in attendance. And in times of sadness, you were there for us too. It just won`t  seem the same without you at the helm.

Rabbi Steinmetz began his remarks by thanking his wife Lisa. He acknowledged his “signature” message: to say hello to the person next you. It is something he repeated every Shabbat. “If we can go make someone walking into the shul for the first time feel welcome, we can change the course of our community,” he said.

Of the Montreal Jewish community he is leaving behind the Rabbi said: “This community has been an incubator of remarkable Jews and has made an impact all over the world.  Not only have I met a unique community; I’ve met unique people.”

Susan Laxer, the past president of Federation CJA and a TBDJ member for the past 40 years, praised his commitment to the community. “You have used your time here very well,” she said. “Together with Lisa you have left an indelible mark in Montreal.”

Adam Shapiro, representing the youth of TBDJ, shared the story about how he wanted to celebrate his Bar Mitzvah in Israel. For timing reasons with family, the only trip that worked out was an adult March of the Living to Poland and Israel. Since he wanted Rabbi Steinmetz to be part of it, he awaited news as to when their schedules would interact. When he heard the recommendation that they do this at the site of the former Majdanek death camp in Poland he did a bit of a double take. But he trusted the rabbi and ended up experiencing something very unique. “The rabbi said that when you celebrate a Bar Mitzvah you put people who could not celebrate before you.”

Rabbi Mark Fishman from Congregation Beth Tikvah in Dollard des Ormeaux said of his friend and colleague: “You always seemed to offer just the right words of advice. You had an individualized answer for each of us.”

Judah Aspler, the energetic president of TBDJ who has extended his mandate to oversee the search for Rabbi Steinmetz’s successor, spoke about the impact he had over the course of the last two decades. TBDJ is one of the city’s most successful synagogues, with membership on the rise and a youth movement assuming leadership roles.

Before Rabbi Steinmetz and his wife spoke, the audience was treated to a beautiful tribute video with many leaders from the synagogue and the community saying all of the right things about one gem of an individual.