The first debate between candidates in the federal  riding of Mount Royal took place at the Spanish and Portuguese Synagogue in Snowdon on September 2 and attracted a standing room only crowd of over 500 people. Congratulations to B'nai Brith Canada (Quebec Region) Executive Director Harvey Levine and his team for putting it together. CJAD's Dan Laxer did an excellent job keeping order as the moderator. 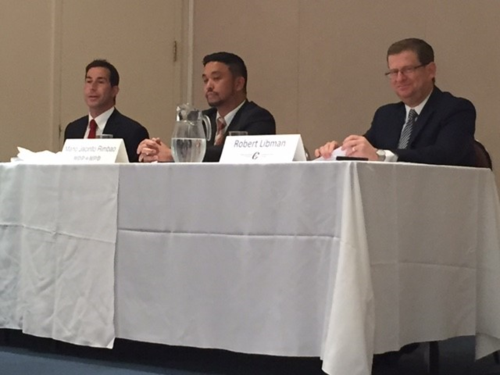 As Liberal candidate and Côte Saint-Luc Mayor Anthony Housefather noted in his opening remarks, this was the first time he faced Robert Libman - the former mayor of CSL and Conservative candidate - in a debate in about 12 years. At time the subject at hand was whether CSL should demerge from the Montreal mega city. Housefather campaigned to demerge; Libman to stay.

While most people in the audience came to see the much talked about face off between Housefather and Libman, NDP candidate Mario Rimbao handled himself quite well.

This was a fairly civil exchange between the candidates.

Here is the CTV report from the night.

And here is the Canadian Jewish News report.

Below is the script from Dan Laxer and the questions he asked each candidate.

1) We know, now, from the Statistics Canada report that came out yesterday that we were indeed in a recession for the first half of the year. It is a fact that, I think, each party leader is going to have accept. How will this affect each of your parties’ economic policies, and your leader’s ability to balance the budget and deal with deficit? Does the answer lie in spending? In service cuts?

2) The community, at times, finds itself divided over Canada’s stance on Israel, and which party seems to have the more favourable policy toward Israel’s right to defend itself, and towards a Palestinian state. Can you clarify your leaders’ policies on the Middle East?

3) Questions of Canadian unity and language are as much a part of our culture as it is a part of just about every election campaign. And that brings with it questions of linguistic equality for minority communities in Canada. I’d like to hear each of your party’s positions on the issue.

4) The Mount Royal riding is a diverse one with several communities of differing levels of prosperity. Can you talk about how each of your parties would address poverty, economic disparity, affordable housing, seniors’ benefits, and child benefits, particularly in this riding?

5) The Iran nuclear deal is obviously not as simple as supporters would have us believe. Would Iran be more or less of a threat should this deal pass? What will this mean for its place in the Middle East, and in relation to Israel in particular?

6) Security concerns are ever bubbling below the surface, concerns over domestic terror threats, hate speech, etc. Where does that fit in with your party’s policies? What have your leaders had to say about that?

7) There is a fine line between pandering to taxpayers, and paternalistically telling them what you think is right, economically. Many families have reaped the benefits of recent tax relief, and minimum wage has become of contentious issue. Are we to expect tax increases to pay for campaign promises? And what about corporate taxes, etc.?

Each candidate had a timed response and a chance for rebuttal. While they sat at the same table, every time they spoke they had to make their way back to the podium. This worked out well as none of the opponents could interrupt one another.

I would say most of the people in the room came from the Jewish community and therefore the questions related to the Middle East and Iran drew a lot of interest. Housefather wanted to make it clear that the time has come for the Conservatives to stop making Israel a wedge issue. He was unequivocal in Liberal Party leader Justin Trudeau's support for the Jewish state. Housefather spoke without any notes.

The next debate is October 1 at Town of Mount Royal Town Hall.

B'nai Brith Canada, by the way,  has ab IMPACT Federal Elections Guide site which includes position papers and parliamentary sub committee hearings and presentations on different issues. You can access this at www.bnaibrith.ca and at  https://www.facebook.com/bnaibrithcanada