I was always a great admirer of Paul Martin during his years as the Federal Minister of Finance and, of course, Prime Minister of Canada. It was therefore a privilege to be in his company this week when he spoke at a fundraising cocktail to support Mount Royal Liberal riding candidate Anthony Housefather, the present-day mayor of Côte Saint-Luc. 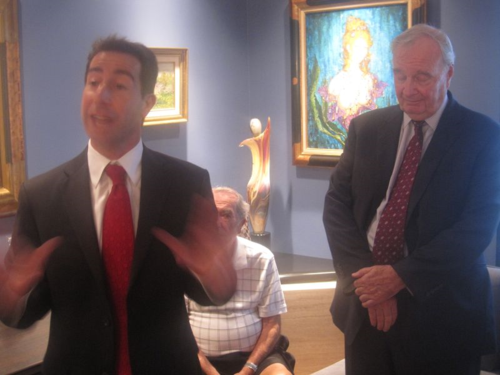 Councillor Ruth Kovac and her husband Peter hosted the event which was full of both young and older residents from the riding. Mayor Housefather will carry the Liberal banner into the October 19 election, intending to fill the large shoes being left vacant by Irwin Cotler.

Introduced by Councillor Mitchell Brownstein, the president of the Mount Royal Liberal Association, Mayor Housefather spoke about the construction of our $18 million Aquatic and Community Centre , which came in below budget. ``What I learned from Paul Martin is that you never spend more money than budgeted,” he said. 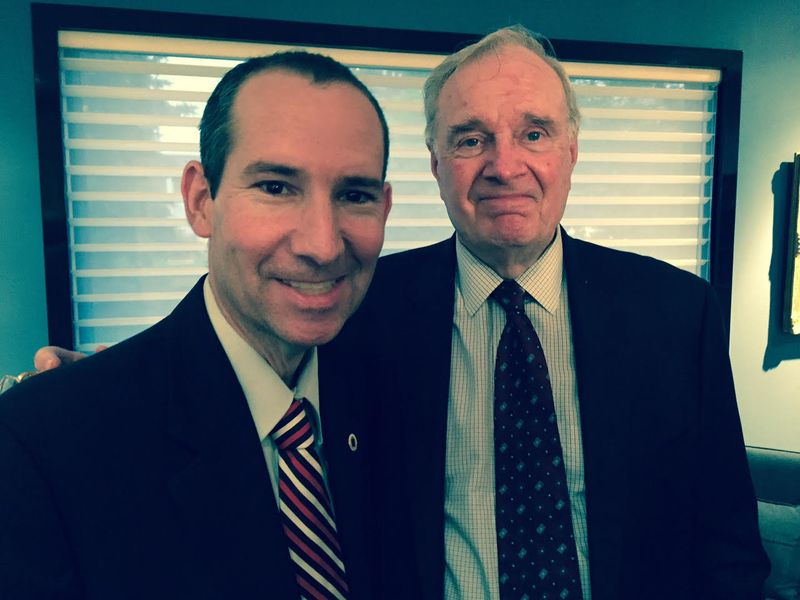 As 101 year old constituent Hyman Fishman (a resident of District 2) cheered him on, Mayor Housefather spoke passionately. “Why am I running?” he asked. “Because one person can make a difference! Throughout my career I have shown that one person can take a stand and be counted upon.”

Mayor Housefather listed the demerger battle and building a coalition of municipalities to fight the PQ’s proposed Bill 14 which would have removed the bilingual status of multiple municipalities including Town of Mount Royal and the PQ's Charter of Values.

“When you speak up one person can make a difference,” the mayor added.

The mayor went on to take Prime Minister Stephen Harper’s government to task for excluding Quebec municipalities from applying for the most recent infrastructure program to celebrate Canada’s 150th anniversary and noted that the Conservative Government had failed to build Canada’s infrastructure over its term in office. He spoke of his record as mayor and as a municipal councillor and reminded people that he always responded to residents directly. "The most important job of an MP is when your constituents need something in Ottawa, you can be there for them,” he said.

Former Prime Minister Martin was very much impressed with Mayor Housefather’s remarks. “What a great Parliamentarian he will be!” he exclaimed. “Anthony, you are going to shake that place up! When you give your speech in the House of Commons, you will bring the roof down.”

Martin criticized  the Harper government’s handling of the economy, noting that he left them with a surplus of $13-billion. Harper  turned that  into various tax cuts and budget giveaways, leaving Ottawa unprepared when the financial meltdown arrived in 2008.

Martin was Prime Minister of Canada from 2003 to 2006 and Minister of Finance from 1993 to 2002.During his tenure as Minister of Finance, he erased Canada’s deficit, subsequently recording five consecutive budget surpluses while paying down the national debt and setting Canada’s debt-to-GDP ratio on a steady downward track. He was the inaugural chair of the Finance Ministers’ G-20 in 1999. During his tenure as Prime Minister, he set in place a 10 year, $41 billion plan to improve health care and reduce wait times; signed agreements with the provinces and territories to establish the first national early learning and child care program and created a new financial deal for Canada’s municipalities. Under his leadership the Canadian government reached an historic deal with Aboriginal people of Canada to eliminate the existing funding gaps in health, education and housing known as the Kelowna Accord.

After leaving politics, Martin founded the Martin Aboriginal Education Initiative focusing on elementary and secondary education for Aboriginal students and the Capital for Aboriginal Prosperity and Entrepreneurship (CAPE) Fund, an investment fund investing in Aboriginal business.

On Israel, Martin maintained that Liberal leader Justin Trudeau and the party stand strongly by the Jewish State. He said Liberals and Conservatives agreed on Israel and accused Harper of playing politics where Israel is concerned. “I do not think it is fair for Harper to pretend that only his party supports Israel,” he said, adding that it was when he was prime minister that Canada’s voting record at the United Nations began to be shifted to vote against anti-Israel resolutions at the United Nations and noted that the Liberal Party would have the same strong support for Israel if in government.

Justin Trudeau will be in the riding for a Town Hall meeting on Tuesday,  July 21 (7:30 p.m.) at the Shaare Zion Congregation on Côte Saint-Luc Road. He will be joined by Mayor Housefather and take questions from the floor.