The annual Côte Saint-Luc Senior  Men's Club luncheon took place June 10 in the gymnasium of the Aquatic and Community Centre with a very special guest speaker. Westmount Mayor Peter Trent was the leader of the demerger movement. Eleven years ago, on June 20, 2004,  residents from most Suburban municipalities voted overwhelmingly to become independent once more even though they had to meet a Quebec Liberal-imposed 35 percent threshold of total eligible voters. 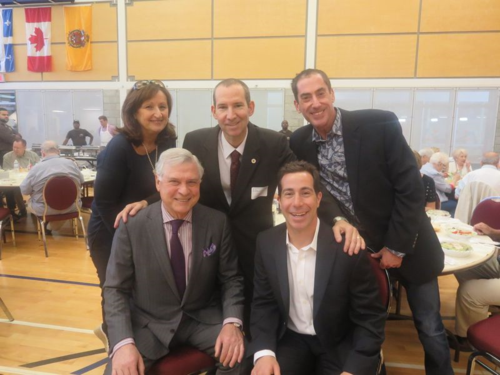 Côte Saint-Luc, Hampstead, Montreal West, Westmount, TMR and a swath of West Island suburbs demerged. Because of the rules in place, municipalities like St. Laurent, Anjou and Outremont did not reach the 35 percent turnout.  Trent has written a book on the subject and never gets tired of discussing the issue, reminding everyone that the warnings by then Montreal Mayor Gérald Tremblay to the suburbs that they'd only control 30 percent of their spending power were false. "Today, Côte Saint-Luc controls 59 percent of its budget," he said to much applause. "We were sold a bill of goods."

On returning to official city or town status, Trent said: "It is like getting your car back after it is stolen. You still know how to drive it, even if some of the parts are not there. But a borough is not a city. You do not own your own property. Demerging was a very rational choice."

"Côte Saint-Luc now has the best of both worlds," Trent said. "Had you remained in the mega city you'd have no power. All I can say is congratulations."

Mayor Housefather said that only twice in his political career has he had tears drip down from his eyes. Once when it looked as if the federalists were about to lose the 1995 sovereignty referendum  and again in the 2004 demerger referendum when there were fears that his team would not reach the total of 35 percent of  voter turnout.

"Look at our Aquatic and Community Centre," he said. "This building would never have existed if we were still part of the mega city. They would never have allowed an $18 million project. Groups like  the CSL Dramatic Society would not exist, nor would our Volunteer Citizens on Patrol program. We really have to thank Peter Trent for his leadership on this file."

Concluded Trent: "Anthony Housefather is known for his intelligence. He was front and center during the Charter of Values debate and has the respect of all of the mayors."

The luncheon, which cost $15 a person and $29 for couples, was catered by Marathon Souvlaki and featured a very nice turnout.