As Mayor Anthony Housefather pointed out,  the City of Côte Saint-Luc marked what was probably a first in our 100 year plus history - dedicating a park after a deceased city councillor on the day of his unveiling. 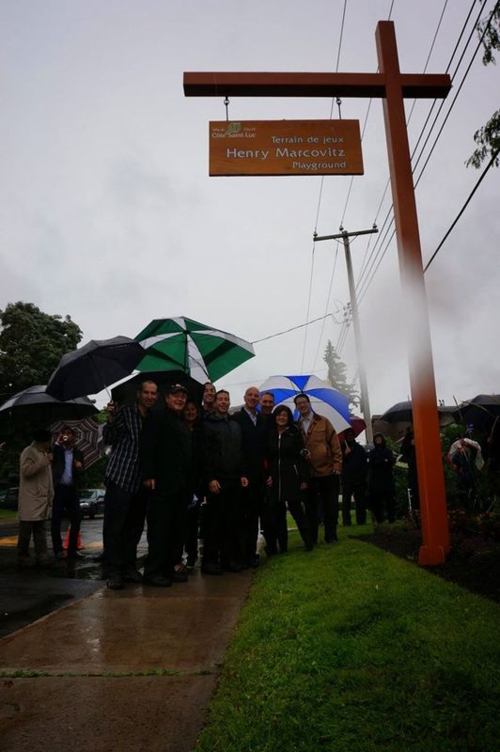 Despite a heavy downpour, a large crowd gathered at McDowell Park on Randall Avenue for the inauguration of Henry Marcovitz Playground. Henry served on council for 20 years. He and his late wife lived most of their lives on Randall - directly across the street from the park. I had the great honour of serving as Henry's city councillor when he and his wife moved to District 2 and a Rembrandt Avenue high rise condo about a decade ago. We spoke often during that time and he even attended my District meetings. I could see the spark in his eyes when he weighed in on certain issues.

Henry passed away last October. I actually saw him a few weeks earlier at a restaurant with his family. He was wheelchair bound, but when he saw me I got a wink hello as he passed by. 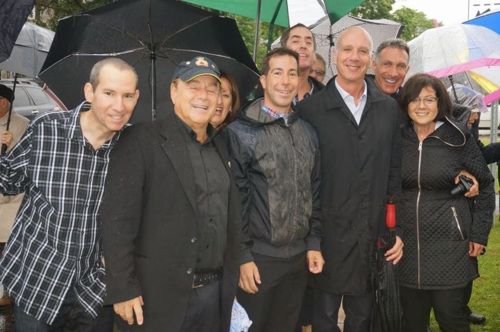 “I first got to know Henry Marcovitz on the demerger campaign in 2004 when he joined with me and other former Côte Saint-Luc elected officials to promote the reconstitution of our city,” Mayor  Housefather said. “He was already quite advanced in years but he had enormous energy and impressed me with his intellect and dedication to the cause.”

Marcovitz moved to Randall Ave. starting in 1955. He became involved in local politics when he worked on the mayoral campaign of Samuel Moscovitch in 1964. He was first elected to city council in 1970 and represented District 3 when the district system was set up in 1982.

Marcovitz was chair of the town planning committee and a member of the finance and audit committee during the mid-1980s. This included the period when Côte Saint-Luc built its new library and city hall. He fought against condo conversions, forcing landlords to carry out improvements required under city bylaws.

“He was my city councillor while growing up in Côte Saint-Luc and was always available and welcoming treating my concerns with respect and importance,” Councillor Mitchell Brownstein said. “I was always proud to say I knew him as a friend to all he served.”

Marcovitz’s contributions were lauded by his peers. When he left office in 1990 after six terms, then-Mayor Bernard Lang called him a “level-headed” and “effective” councillor and that “he added a great deal of serenity to negotiations.” Then-Councillor Isadore Goldberg called him “one of the deans” of council.” Councillor Glenn J. Nashen said Markovitz had been very committed and served as an inspiration for new leaders.

“It was great having him as part of the council for two decades and his name and way of thinking continues to be mentioned a half century later,” Councillor Nashen said.

Marcovitz had been accepted to McGill medical school, but rather than complete his medical training, he felt compelled to enlist with the Canadian Army to fight in the Second World War. He later returned to school and graduated with a bachelor of commerce degree. He went on to become a successful businessman. He met his future wife, Shirley, who was the love of his life for 59 happy years. When she passed away a few years ago, he asked that the tombstone be engraved with the unusual but heartfelt words, “a beautiful marriage.”

He lived a healthy lifestyle and stayed in shape by water skiing, downhill skiing, and playing squash and golf. He even continued to exercise when he was in a wheelchair and attended lectures at the library into his last year.

“Henry was a Mensch, a gentleman and a role model,” said Rabbi Chaim Steinmetz at Marcovitz’s funeral last year. “He could fix his own car, repair his own house and do his own taxes. Above all, he was a man of integrity, kindness and generosity.”

Henry's son Allan spoke on behalf of the family and broke down a few times as he described what this honour would have meant to his dad. His sister Marcy and brother Michael echoed those sentiments. Michael was a hockey teammate of mine back in the days when we played at the old Montreal West Arena and had to get up at 6 a.m. on weekends. "Dad always brought me to the rink," said Michael, whom I remember to be a good stay at home defenceman,

Honored to have this CSL playground carry Henry Marcovitz name. He represented the district with dignity and honour and his name should be remembered on the street where he lived.
So sorry I missed the inauguration today but I am sure I will be taking my grandkids there very soon.