A Côte Saint-Luc District 2 information meeting will take place on Monday, June 8 (7:30 p.m.) at City Hall (5801 Cavendish Boulevard). Councillor Mike Cohen created this initiative when he was first elected in the fall of 2005 as a way to maintain closer relations with constituents and talk mainly about issues related to the surrounding neighbourhood. Since then a number of other councillors have followed suit.

The format for this year’s meeting will change and be done as a round-table, enabling all of those on hand – constituents and special guests – to be in closer quarters and truly be able to take part in an exchange of information.

Mayor Anthony Housefather will be on hand for an update on important city issues.   Charles Senekal will be there to hear comments about the Cavendish/Kildare intersection, talk about a new park planned for that corner  as well to deal with any other traffic issues and provide  an update on the Quartier Cavendish development. Beatrice Newman will address concerns regarding repairs done on local streets, recycling, garbage collection and much more.  There will also be some news about a new park planned for   located at the Cavendish/Kildare intersection. 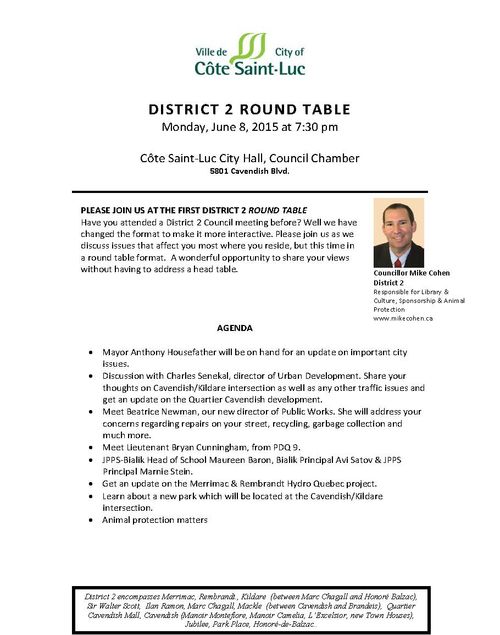