Wednesday May 6 is McHappy Day at McDonald's Restaurants across Canada, bringing the community together to raise money for children in need.

Once again this year, local Montreal franchise owner Pierre Brunet has selected the MAB-Mackay Rehabilitation Centre as the focus for his McEfforts. For anyone who goes to one of Pierre's 11 McDonald's locations, you will have the opportunity to support the pediatric programs at MAB-Mackay. What a fine organization Pierre has chosen to partner with. Wearing my hat for the English Montreal School Board, we operate the Mackay Centre School  and Philip E. Layton School for the Visually Impaired on Decarie.

I stopped by the beautiful Côte Saint-Luc Road facility where I chatted with supervisor Jeffrey Ferreira, manager John Raftopoulos and Jenny Jacob and Isabelle Hartnell from MAB-Mackay. One dollar  from sales of each Big Mac, Happy meals and McCafé goes to the charity. They are also selling mugs, balloons, caps and little boots that go up on the wall with your name on it. A raffle is taking place as well for a brand new adult bicycle. 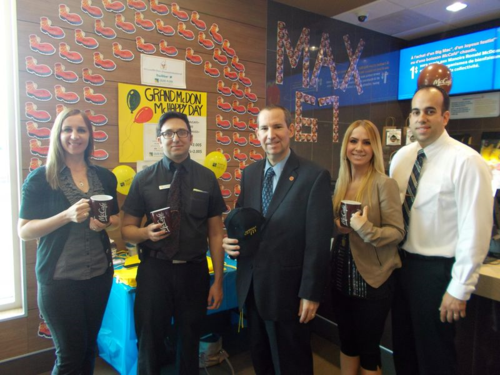 Pierre Brunet and his team always go the extra mile to lend a helping hand in the community, as witnessed by the incredible work done to support Manoir Ronald McDonald near the Ste. Justine Hospital. This serves as a temporary residence for families from outside the Montreal area who bring their children here for medical treatment.

Everyone I saw was being very generous. 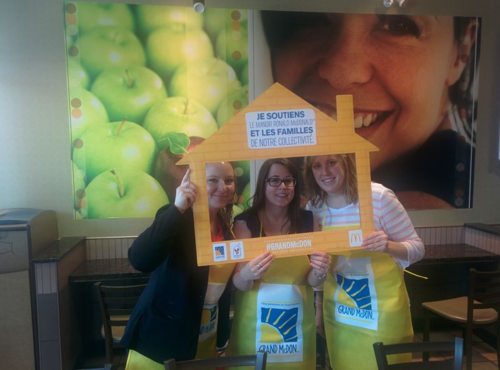 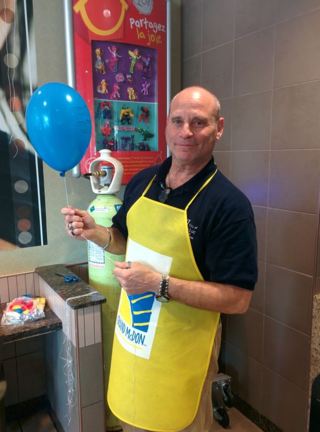 Alvin Fishman from Parks and Recreation at the McDonald's Côte des Neiges locale.

.
We encourage everyone to help make a difference in the lives of the more than 2,000 children with vision, hearing, motor and communication impairments who depend on the MAB-Mackay each year.

For more information about the MAB-Mackay Foundation, call (514) 488-0043 or  log on to www.foundation.mabmackay.ca.