Lawrence Bergman gets fitting honour a year after his retirement

More than a year after his retirement from political life, Quebec’s de facto Minister of Jewish Affairs got the true honour he deserved. Former Liberal MNA for D’Arcy McGee Lawrence Bergman was feted on May 11 at the Adath Israel Congregation in Hampstead, the synagogue which he served as president of for four years prior to entering politics. This was also the site for most of his nomination meetings.

It was a packed house, with political movers and shakers and community leadership. There was valet parking and a strong police and public security presence.  There were trays of food to choose from and servers circulating with delicious hor d’oeuvres. As I told event co-chairman Samuel Gewurz when I entered, it looked like he was hosting another bar mitzvah for Lawrence. 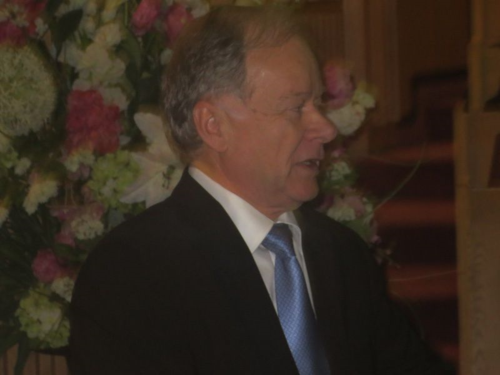 Bachand credited Bergman for educating him on the many facets of the Jewish community. “We travelled together and led a most important delegation to Israel,” he said. “We went to Yad Vashem – god bless their souls, god bless Israel.”

One of Bergman’s two sons, Stuart, spoke of what a devoted father Lawrence was to he and his brother Mark.

Community leader Steven Cummings, also a co-chair of the event, introduced Charest and reminded everyone in the room what a crucial role he played in the 1995 Quebec referendum. “We suffered from a lack of leadership,” he said. “Then Jean Charest made that electrifying speech. That gave us the resolve to fight until the last moment.” 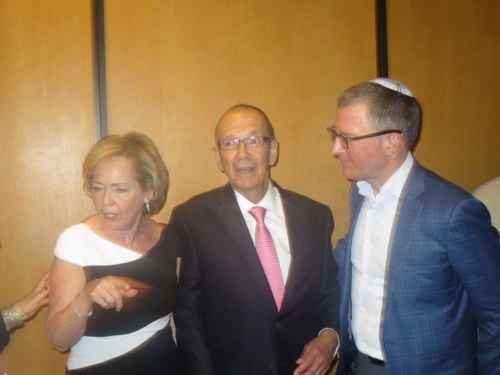 Bergman, his parther Vivian and a well wisher.

Charest was eventually recruited to lead the Quebec Liberal Party in 1998. While the party won a majority of votes in that year’s election, the PQ gained more seats. Charest went about rebuilding the Liberals in the province in 2003 won the first of three consecutive elections. 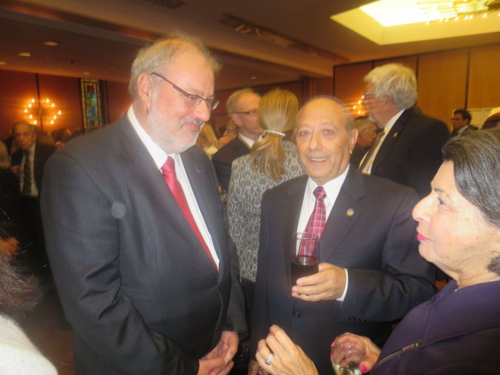 Have we seen the last of Jean Charest in politics? He may be comfortable in the private sector these days, but he sounded very much like someone who still has the itch to campaign. If Prime Minister Stephen Harper does not win another mandate to govern next October, do not be surprised to see Charest consider a bid to lead the Conservative Party he left 17 years ago to take over the Quebec Liberals.

Charest credited Bergman for standing up to separatist Yves Michaud, who condemned the voters of D’Arcy McGee for voting so strongly against sovereignty. Charest presented a motion to the National Assembly condemning references to "an ethnic vote against the sovereignty of the people of Quebec" and speaking of B'nai Brith Canada as "an extremist group against Quebecers and against sovereignty", as expressed by Yves Michaud at the Quebec Estates-General. The Premier   Lucien Bouchard condemned the remarks in the name of his party and the government. The motion was adopted unanimously by the National Assembly. When Bouchard left politics, he alluded to Michaud’s intolerance as one of the aspects which soured his opinion of politics. 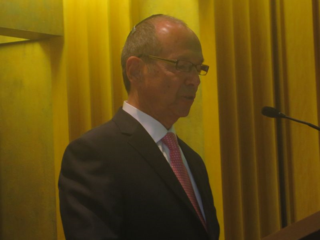 Charest named Bergman Minister of Revenue in 2003. “Lawrence kept meeting people and telling them he was their partner,” he recalled. “He said ‘I have 50 percent of your business and   want your money now.’ Lawrence Bergman had the respect of all of his colleagues. No project was important to him than the Jewish General Hospital. All of us who have experience with the Jewish General know this is the best hospital in Quebec.”

Bergman was the last to speak and he was eloquent as usual. “This evening is overwhelming me with emotion,” he said. “I am watered over with so many great memories.  I have been blessed in my life to have many families. My first great family was my constituents. We laughed together, we cried together, but we believed in each other.”

Bergman spoke of his close friendship with Charest. That he had a personal problem and needed to speak to a friend. “That friend was Jean Charest,” he said, noting how the premier was in France for the wedding of his daughter yet called him immediately and did so again a few days later to check up on him.”

Bergman ran in six election campaigns and worked on one referendum. He was a fabulous MNA.  Côte Saint-Luc honoured him last summer when we named one of the chalets at Pierre Elliott Trudeau Park. It was the least we could do to show our gratitude to the man who played a key role in saving our Emergency Medical Services after we demerged from the City of Montreal.