The annual Yom Hashoah commemoration took  place on Wednesday, April 15 in the Tifereth Beth David Jerusalem Congregation on Baily Road in Côte-Saint-Luc, with Quebec Premier Philippe Couillard on hand to deliver greetings. He was on hand two years ago as well, shortly after becoming leader of the Liberal Party. 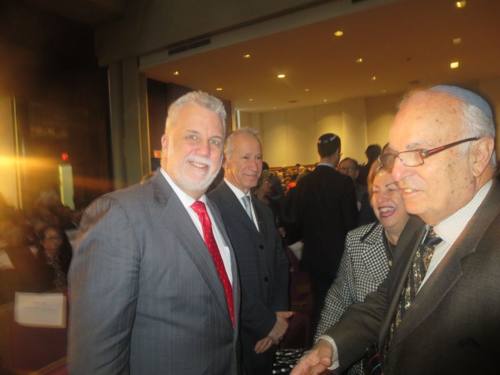 The Premier, with David Birnbaum, is welcomed to CSL.

Couillard expressed his sympathy to the survivors of the Holocaust on hand for their loss. "Today their memories are very much alive," he stated. "This is why we have a duty to remember. We must remember that human beings are capable of the best and the worst."

The Premier was accompanied by D'Arcy McGee Liberal MNA David Birnbaum. Just a few seats away was Birnbaum's predecessor, Lawrence Bergman. I was on hand along with Mayor Anthony Housefather and Councillors Sam Goldbloom, Ruth Kovac, Dida Berku, Mitchell Brownstein, Glenn J. Nashen and political representatives from the municipal, provincial and federal levels. Israel Consul General Ziv Nevo Kulman, the child of a Holocaust survivor, spoke eloquently and reminded everyone that having a Jewish State will ensure that a Holocaust never happens again.

This community-wide commemoration is extremely well organized by the Montreal Holocaust Memorial Centre. The ceremony perpetuates the memory of all those who were murdered during the Holocaust and honours those who survived. It reminds us of our collective responsibility to remember the Holocaust and to protect individuals and communities from oppression, antisemitism, hate, racism and discriminatory policies. This year’s theme, Remembering 1945 – Liberation: Hope and Anguish, reflected on a year characterized by both hope and despair as the end of the war drew near and liberation was in sight. Here in Montreal we are fortunate to still have Holocaust survivors in our midst 70 years after the end of the war, survivors who have contributed so much to our dynamic Jewish and Montreal communities. They were able to rebuild their lives despite the destruction and the losses they had suffered. Judith Nemes Black and Joyce Rappaport served as co-chairs.

Six Holocaust survivors lit memorial candles and shared their memories of liberation through short video testimonies. No matter how many times I hear these stories, I still find it hard to believe that such cruelty existed  in this world.

Hermann Gruenwald explained that he was the only Jewish cook in the Auschwitz concentration camp. He survived a death march where almost 18,000 people died, as well as several weeks of starvation before the liberation thanks to the food he could get because of his job in the kitchen. Elie Dawang was 10 years old at the liberation of France. He recalled the days when the Germans left the little village where he had been living in hiding, and the emotions he felt when he was reunited with his father. Sara Hersco-Hollander described how the Germans left her and other women in a cattle car without water and food for days on their way to Dachau. She was liberated by the Americans on May 1, 1945 and taken to a DP camp in Feldafing. Ursula Feist recalled the feeling of sadness having lost many family members in Berlin as the British celebrated the Liberation. Olga Sher spoke about the fear that haunted her for long years even after the liberation. Not only was she afraid that the Germans might return, but she, as many other Jews, was also not welcomed back by their fellow Polish countrymen. Ernestina Neumann Brauner related how hopeful she felt at liberation, but at the same time her dread of the Russian soldiers who had a reputation for being rough and raping women. 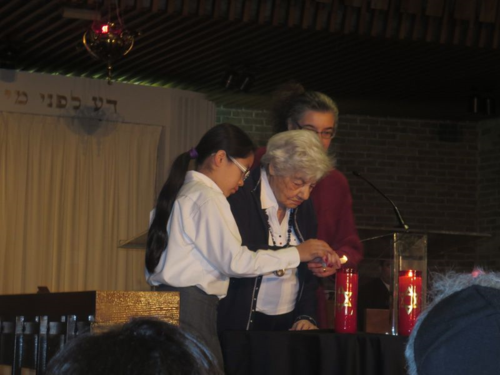 Ernestina Brauner Najman lights a candle with her daughter Ruth and granddaughter Aliza.

Each survivor was accompanied by second and third generation survivors, who will ensure that these stories remain very much alive for years to come.

Congratulations go out to JPPS choirmaster and music teacher Elena Khitrin, who chose her Grade 6 students to perform at this very special event as it is in keeping with their curriculum unit - the Holocaust. JPPS Yiddish teacher Sheila Witt, has always believed that students learn best when they interact with the subject matter and learn about it from different perspectives. For Yom Hashoah, Ms. Witt created an innovative project that will help every student understand, think about and honour the victims of the Holocaust. Each student was matched with a child victim of the Holocaust who had the same date of birth (day and month) or Hebrew name. Using the Yad Vashem website , each student created a portrait of their assigned child victim, which included information about their child’s family, where they lived and ultimately, where they perished. Alongside photographs of each child victim, the student wrote a text about the child, in both English and Yiddish. These pages were put together to create an album, which leaves a profound mark on every single student, as it creates a connection between the student and their assigned child victim. “This connection,” says Sheila, “is never lost.” 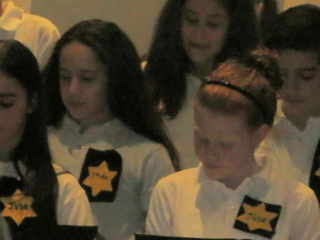 Some of the JPPS students.

Ms. Witt later invites Holocaust survivors to visit with the Grade 6 students, where they view and discuss the album. which is then donated to the JPPS library; a place where the child victims will always be remembered.

Below is MNA Birnbaum speaking about Yom Hashoah in the National Assembly, showing his impeccable bilingualism.