On the eve of National Volunteer Appreciation Week, we tip our cap to noted family

lawyer Irving “Bo” Narvey. For 43 years he has volunteered his time at the Head & Hands Legal Clinic in NDG, which promotes the physical and mental health of young people. The organization offers a variety of medical, social and legal services.  As he moves towards semi-retirement in his private  practice, Bo is stepping aside at Head & Hands as well. He originally signed up fresh out of law school.

THE BOOK OF BERNARD

In 1977, 19-year- Bernard Gotlieb was living a happy middle class existence. He had a passion for the word game scrabble and life was good until he was diagnosed with leukemia. Bernard became one of the first leukemia patients to undergo – and survive -- a bone marrow transplant in Canada, a treatment that is so common these days. While he beat that disease, he has endured   infections, numerous extended hospital stays, injuries, accidents, operations, medical procedures, financial strains, a brain tumour, and a worsening skin condition that led to the amputation of both his legs.Yet somehow, through the love and support of friends and family and his continuous connection to scrabble he always has a smile on his face. 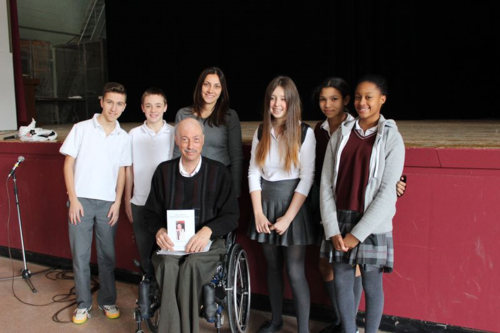 Bernard Gotlieb at a recent speech at Royal Vale School.

Today he  runs games classes  at a variety of schools and  also tutors students in math, French, English and Spanish at his Côte Saint-Luc home. You can learn more via his  privately-published memoir “Hey What Happened To You?” in which he chronicles his struggles with a lot of with a lot of humanity and humour.  It is available at www.amazon.com,  Bonder`s Book Store (52 Westminster) in Montreal West or via the author at bgotlieb@gmail.com.  He will be speaking at Beth Zion Congregation in CSL on May 6.

SOLLOWAY TO BE  HONOURED

The Bâtonnier of Montreal, Gregory Moore, has announced that noted family lawyer Ian M. Solloway of Cöte Saint-Luc will be the recipient of the 2015 prestigious Mérite du Barreau de Montréal  in recognition of his exceptional contribution to the Montreal Bar and its activities.  Solloway is the chair of the English-Speaking Section of the Bar of Montreal, having occupied this position for an unprecedented six years since 2009.

In 2014,   Solloway was awarded “The Past-Presidents Medal ”of the Lord Reading Law Society for having achieved excellence in the profession ; having made a significant contribution to the community and being of the highest integrity.  The “Mérite du Barreau” will be presented to  Solloway at the Annual General Meeting of the Montreal Bar to be held on Wednesday, May 6.