Our former Police Commander shows his "historian" side

It was most interesting to watch the recent French-language documentary called Le Berceau des Anges le documentaire) about the Montreal Black Market baby ring of the 1940's and '50's. Montreal West resident and former Montreal Police Department photographer Harold Rosenberg brought it to my attention.

"I was sold to my parents by the same people who operated the ring," Harold explains.

I was delighted to see former Police Station 9 Commander Sylvain Bissonnette interviewed and identified as a "historian."  This is something I did not know about Sylvain, a true gentleman who ran police operations out of the Kildare and Cavendish headquarters for seven years until August 2013.  He is now the commander at Station 8 in Lachine. 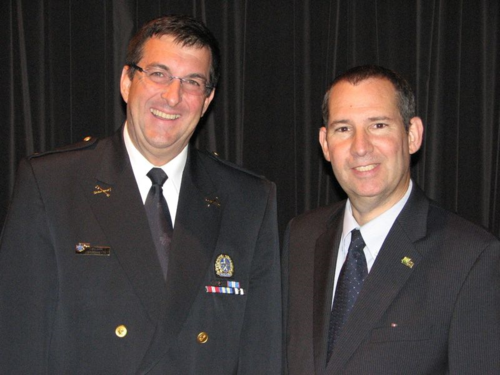 Here I am with Commander Bissonnette shortly before his departure.
"Sylvain and I volunteer together at the Montreal Police Museum.," Rosenberg explained. "Neither of us realized at the time that we were both participating in the same documentary project. He's a very smart guy. He's the historian for the Police Museum, while I'm a researcher."
Rosenberg spoke French while most of the others did so in English with sub-titles. "It was very well done, and really shows the way things were with the Jewish and Catholic communities in those years in Montreal," Rosenberg notes.
The 45-minute  film aired last week on the Historia specialty channel. It's now available for free viewing.  Here is the link:

http://www.historiatv.com/videos?video=uXK_gm2Hyai2&id=IBMS000532240
The documentary was produced as accompaniment to a five-part drama series (Le Berceau des Anges) that aired on SeriePlus.
As for Commander Bissonnette, he shared this information with me.

"When I was doing my BA, I met a chief inspector who was an history buff," he explained. " I decided then to do a Master's Degree in history on the subject of the amalgation of police forces on the Island of Montreal.During my second year, he proposed that I join the force, which I did. I completed my Master`s  part-time and established  with him the Police Museum. He became my first boss. We are still very good friends and speak on a weekly basis, and we are both members of the museum with Harold. His name is Robert Côté. We also did a project with The Montreal History Center. Another boss told me that management studies would also be important for the future and that's what I did after. I'm also a lecturer at the dept of Criminology at the Université de Montréal  in crime prevention and  I participated in a number  of documentairies about the police."