Coffee with a Cop now a monthly affair

The latest Coffee with a Cop program on  February 27 at the McDonald's Restaurant on Côte Saint-Luc Road was a big success. 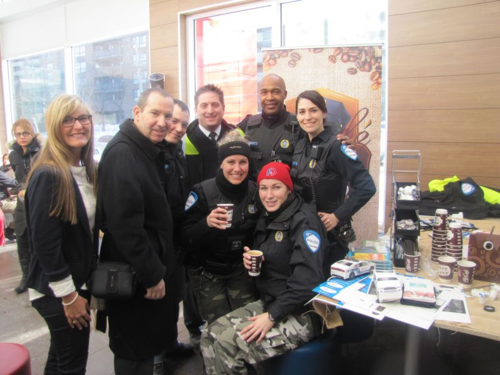 Here I am with some of our police officers.

We are fortunate to have Neighbourhood Police Stations. Côte Saint-Luc is the home for Station 9, which also services Hampstead and Montreal West. Coffee with  a Cop is actually an American concept being piloted by Station 9 on a monthly basis. The next edition will take place on March 26 at the Quartier Cavendish McDonald`s in the Food Court. 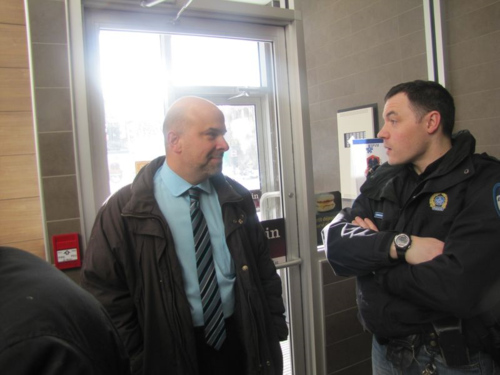 It was wonderful to so many police officers, along with CSL Public Safety Director Jordy Reichson, working their way to the different tables to talk to people and hear their concerns. As residents streamed in, Socio-community Officer Isabelle Dubé and her colleagues were pouring people coffee and handing out different kinds of information about the station. Marie-Christine Nobert, who normally performs those duties, is fulfilling other duties these days due to a back ailment. She was nonetheless front and centre at Coffee with a Cop, a concept which is sure to spread across the city in due time. The police talk to some customers.

Coffee with a Cop Round Two is February 26 in CSL

Police officers from neighbourhood Police Station 9 (PDQ) are inviting   Côte Saint-Luc citizens for a second round of Coffee with a Cop on Thursday, February 26 (9  a.m. to 11 a.m.) at the Côte Saint-Luc Shopping Centre McDonald's Restaurant. 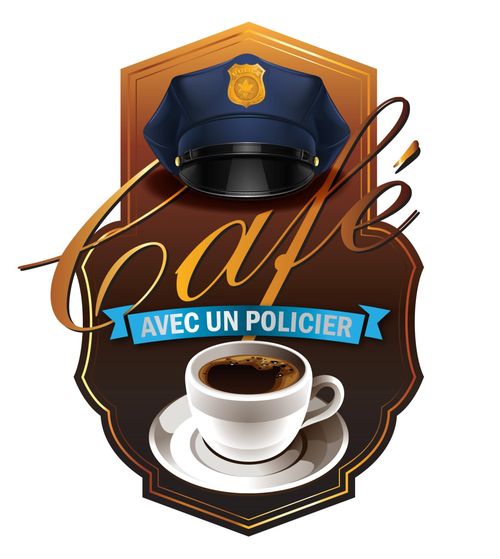 Coffee with a Cop is an informal event which allows police officers and citizens to meet in a neutral environment to facilitate  dialogue. The aim of this activity is to let anyone discuss freely and exchange on various public security topics and concerns that affect the Côte Saint-Luc community. In addition, this is an opportunity to strengthen police relations with its citizens, who normally meet in emergency circumstances that are very emotional. With Coffee with a Cop, citizens get to know PDQ 9 police officers in a friendly atmosphere.

Bravo to all involved.

The Côte Saint-Luc Dramatic Society  has another hits on its hands. I attended the special VIP viewing of their hilarious whodunit, Haven’t Got A Clue, which continues February 12 to 15, at the Harold Greenspon Auditorium ( 5801 Cavendish Blvd).

Artistic Director, Anisa Cameron, has assembled a stellar cast of 25 professional and community actors who are brining the play to life. “I think people will really enjoy Haven’t Got A Clue,” Cameron said. “It’s so funny and our cast is so spectacular, it’s going to be a memorable time at the theatre for all. I am particularly excited to see how the audience participation in determining the end plays out. It seems like such a fun way to enhance the performer/audience relationship.”

The audience is asked to decide the fate of the show at each performance, choosing from three different endings. That was a lot of fun.

Haven’t Got a Clue is a murder mystery that takes place at Covington Manor in Connecticut in 1954. McCarthyism is at its height and the country is terrified of Communism and the threat of nuclear war. Theodore Covington, a well-known war profiteer, has died under mysterious circumstances and a whole host of shady characters with motives galore have shown up at the manor to hear the reading of Theodore’s will just as Tropical Storm Francine has been upgraded to a full-blown hurricane. The guests must batten down the hatches with a murderer in the midst. As suspects emerge and victims begin to drop like flies, it’s up to the audience to determine the outcome of this fast-paced, hilarious whodunit.

“Murder is most definitely a laughing matter in this treacherous tale that weaves double-crossing, revenge, crimes of passion, dark secrets and government conspiracy into a fast-paced, laugh out loud, irreverent take on the murder mystery genre,” Cameron said.

Riva Bruck and Karina Milech open the show up as the fictitious Christie sisters, Tabitha and Clarissa. Cameron makes a cameo at the very end as their older sister Agatha.

Councillor Mitchell Brownstein, who established the CSL Dramatic Society three and a half years ago, took a break from performing this time around and serves as producer. He and Mayor Anthony Housefather gave opening remarks.

“The show will be a great Valentine’s Day surprise for your significant other,” said   Brownstein. “Do something different this year and watch this very funny story, which takes place in Connecticut in 1954.”

Tickets are available at the Eleanor London Côte Saint-Luc Public Library, the Aquatic and Community Centre or at www.CSLDramaticSociety.com. The cost is $23, or $20 for students and seniors.

Here is a teaser for the show via Harroch, who shaved his beard soon after this recording:

CSL Winter Carnival 2015 a huge success despite the bitter cold

This has been a pretty horrible winter temperature-wise and Sunday, February 8, 2015 was no different. The thermometer read minus 17 degrees celsius and we had some blowing snow to boot. It was not pleasant to be outdoors. None of this stopped the 2015 Winter Carnival in Côte Saint-Luc from taking off nicely. 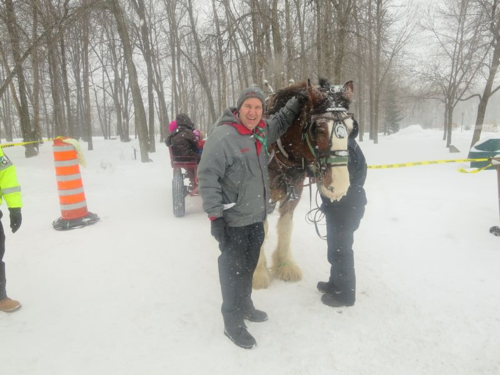 Will the Clydesdale and myself in the bitter cold.

Free taffy in the snow.
In addition to the main Sunday events, Winter Carnival Week also included the Peewee ‘A’ Outdoor Hockey Tournament, which actually began on February 8 at the open-air Confederation Annex building at Pierre Elliott Trudeau Park. This year, Côte Saint-Luc  welcomed 14 teams from Quebec and Ontario,  playing a record 26 games.
Côte Saint-Luc also hosted an adult hockey tournament on  February 6 at the Samuel Moskovitch Arena. There was public skating at the arena on  February 7.
On Saturday, February 14, the annual Winter Carnival Valentine Dance  will take place at the Côte Saint-Luc Gymnasium from 7:30 pm to 11:30 pm. Tickets for the dance are $25 in advance or $30 at the door.  The dance highlights include popular tunes spun by DJ George Thomas, hot and cold hors d'oeuvres served at your table, a hot buffet midway through the evening, and a sweet table to end off the night. It is also bring your own wine! Councillors Steven Erdelyi and Allan J. Levine serve as co-chairs. 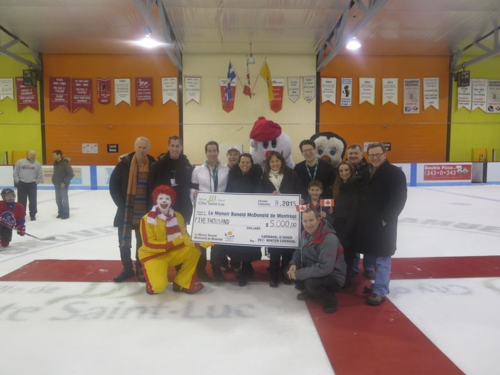 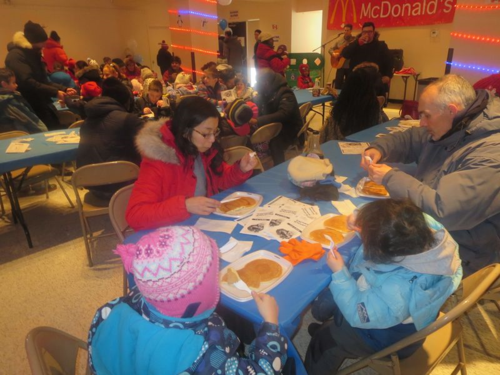 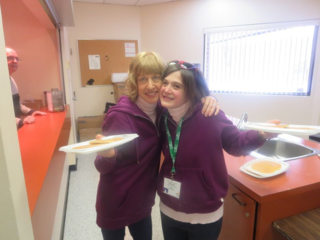 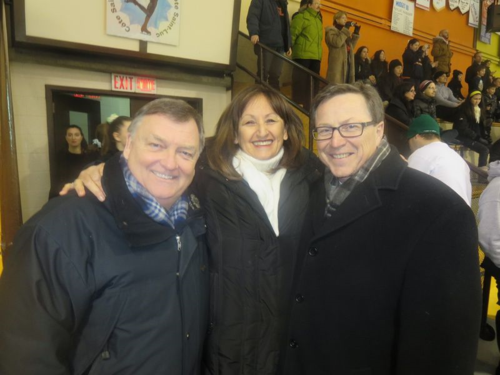 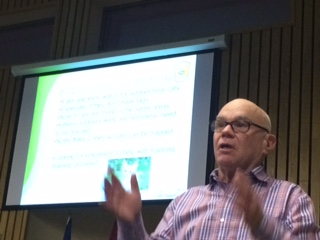