During the nine plus years I have served as the city councillor for District 2 in Côte Saint-Luc, and even before that as a resident of the area, I have always stayed in close touch with the administration of Bialik High School at the corner of Kildare Road and Marc Chagall.

In January, there will be a new man at the helm in Avi Satov. He will succeed Ken Scott as principal. It is interesting to note that Avi's childhood friend growing up in Chomedey was Councillor Steven Erdelyi, who by day is the Head of School at Solomon Schechter Academy - a feeder school for Bialik.

I recently sat down with Avi and JPPS Bialik Head of School Maureen Baron to  discuss a variety of issues. The subject of traffic violations by Bialik parents was big problem early on in my mandate. But I must credit past administrations for not turning a blind eye to this. Avi, of course, is by no means a newcomer here. He has been part of the Bialik furniture since coming aboard as a teacher in 2002. Most recently he was the Senior Vice-Principal. I know I can count on him and Maureen to be attentive to parents not blocking driveways or stopping in no parking zones. 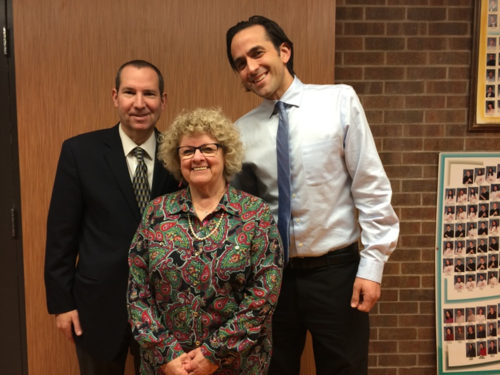 Here I am with Maureen Baron and Avi Satov.

Enrolment at the school is presently at the 360 mark, nearly half of what it was about a decade ago. Maureen, whom I worked with at the English Montreal School Board for more than a decade, attributes much of the drop to simple demographics. Nevertheless, she believes with Satov at the helm numbers will start to climb again.

“I am excited,” said Avi. “The fact that people know me and I have been here for a long time should help. My goal is to make this a true Jewish school; not a school for Jews. I want to see kids graduate from here and stay in Quebec and that means continuing our good work in French instruction. We also need to improve the numbers in our French sector.

Avi, 39 and his wife Sheri are the parents of four young children aged five, four, two and six months. They reside in Dollard des Ormeaux on the West Island.  “My wife is awesome,” he says, crediting her support for enabling him to accepting the charged and time consuming position.

Avi began his climb up the administrative ladder in 2009 when he was named  Dean of Students. That was followed two years later by the job of Assistant Principal and then Senior Vice-Principal in 2012. He was the Director of Camp B’nai Brith of Montreal and  Pripstein’s Camp Mishmar. Over the years, he has also been involved with other causes such as Habitat for Humanity, March of the Living, ORT, the Montreal Canadiens Children’s Foundation and Agence Ometz. He also has sat on the Bronfman Jewish Education Centre’s Board of Directors.  A graduate of Herzliah High School, Vanier College and McGill, he actually aimed for a Commerce Degree before switching gears to the Jewish Teacher Training Program

Bialik has launched an International Baccalaureate Program, now in place at the Secondary I, II and III levels. It is well known for an outstanding performing arts program. “The students absolutely love being here,” he says. “It is not uncommon to see kids here as late as 10 p.m. due to all of the extra-curricular options we offer.”

Avi was recently in attendance at a 10-year reunion party for grads at the downtown Biermarkt. Comedian Robby Hoffman, a 2004 grad and now a full-time TV writer in Toronto, performed in front of 75 attendees. They also held a brunch at Bialik the following morning with former teachers, raising more than $1,200 for a memorial fund through donations  in honour of classmate Jamie Abrams, who passed away earlier  this year. The fund, which will go toward improving the Student Lounge at Bialik, is still open for donations through Amy Finkelstein @ 514-731-3841, ext. 263