Côte Saint-Luc has lost another one of our builders following the passing of former city councillor Henry Marcovitz on September 6. I last saw Henry just over two weeks ago dining with family members at a popular Montreal restaurant. He was wheelchair bound, but seemed to be in good spirits and very involved in conversation around the table.

I was proud in recent years to serve as Henry’s city councillor. He and his wife of 60 years Shirley had left their long time home on Randall Avenue and bought a condominium on Rembrandt Avenue. I immediately came into regular contact with them: Shirley via email and Henry by telephone, on the street and at the grocery store. They attended my District information meetings and provided feedback on discussions I held regarding possible changes to Rembrandt Park.

Two and a half years ago, on March 12, 2012, Shirley lost a battle with cancer. I found this remarkable given the fact I ran into her often during what had clearly been a horrible period in her life and she never brought it up or sought sympathy. Henry was naturally devastated and told me how lost he felt. His family, though, stepped in and provided extraordinary support. I remember standing at the front door of our Aquatic and Community Centre when it opened for the first time three years ago. My late father Larry, who went way back with Henry, was standing with me. In walked Henry with his daughter. He wanted to be there and see for himself our state of the art facility. 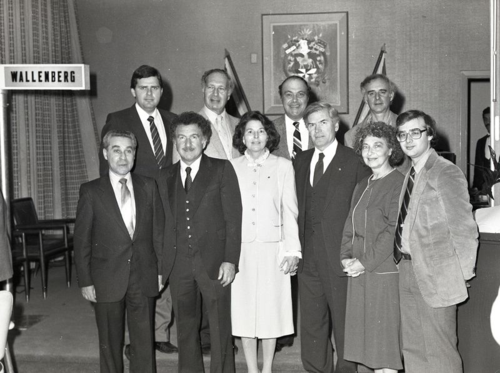 Henry Marcovitz (back row second to the left), shown in this 1983 photo with the mayor and members of council.

I covered Côte Saint-Luc City Hall in the 1980s for The Suburban and as such conducted many interviews with Henry. He was a stickler for financial issues and spoke out loudly against any expenditures he thought were out of line. This was the time of the construction of our present-day City Hall and Library Complex and he had many opinions on the project. Henry served on council for 20 years and among the committees he chaired was Town Planning.

At his funeral we learned that Henry had been accepted to McGill Medical School at a time when not too many Jews were admitted. However, it was at the same time as World War II and he felt compelled to fight for his country and enlisted in the Canadian Army. After suffering twice from pneumonia  he received an honourary discharge, returned to school and graduated with his Bachelor of Commerce Degree. He went on to become a successful businessman. One day Shirley, a bookkeeper, appeared in Henry’s office and he was immediately smitten. He asked her to join him at a concert and 10 days later they were engaged.

Henry’s granddaughter Gillian and son Alan spoke at the funeral. We heard about what a healthy life he kept, staying in shape by water skiing and doing downhill, as well as golf. He even continued to exercise when he was in a wheelchair.

“Dad was proud of the exemplary way the city was run,” said Alan.

Added Rabbi Chaim Steinmetz: “Henry was Mensch, a gentleman and a role model. He never took a pill. Occasionally he would indulge himself with half a Tylenol. Even a few weeks ago he went to the library for a lecture by Dr. Joe Schwarcz. He could fix his own car, his own house and do his own taxes. Above all, he was a man of integrity, kindness and generosity.”

Our sympathies are extended to  his family.

I will be recommending an appropriate way for the city to honour Henry’s memory.