Honouring a special constituent on the occasion of his 100th birthday 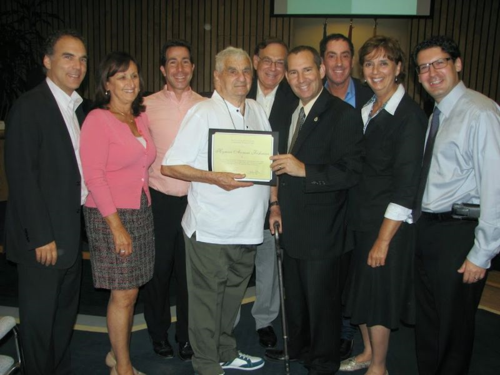 I present Mr. Fishman with a certificate, surrounded by the mayor and council.

Hy is by no means your average centenarian. He still lives in his own apartment on Sir Walter Scott Avenue, in no need for someone to cook, clean or shop for him. Despite bad knees, he does his best to get around. His longevity may have something to do with him dragging his exercise bike into the hallway right outside his door and riding like the wind for half an hour at least several times a week, if not daily, says his friend and neighbour Bram Eisenthal. 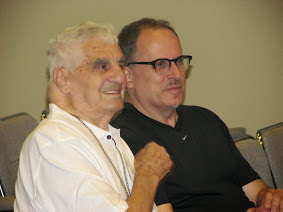 A number of years ago Hy dedicated two city benches on Kildare Road in honour of his late wife Fay. He can be seen sitting there often during the spring, summer and fall months.

Hy has become something of a defacto grandfather to his two young neighbours, Alexia and David, children of Gina and Nicu.

“Several of us in his building are very protective of him and we try to keep an eye on him and make sure he is safe and well,” says Eisenthal. “Hy's mind is sharp as a tack and his collecting of pins from around the world may have something to do with his continuing zest for life, something exceeded only by his passion for his beloved Habs.”