For David Birnbaum, the newly elected Liberal Member of the National Assembly for D'Arcy McGee, July 1 marked his first Canada Day in Côte Saint-Luc. "What a great show you people put on," he told me, looking out in almost disbelief from the grand stage as a sea of thousands of people gathered for closing ceremonies and fireworks. 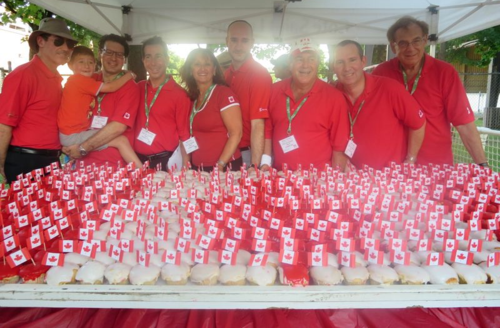 Members of council and our Scotiabank representative prepare to hand out cupcakes.

A huge hats off to Councillors Mitchell Brownstein and Sam Goldbloom, their committee and our amazing Parks and Recreation team headed by David Taveroff.  Special marks to  Laura Trihas, Cornelia Ziga, Alvin Fishman, Harold Cammy and cast of others who are part of such a well oiled team that our Canada Day is the envy of other municipalities. There were activities at Pierre Elliott Trudeau Park all day. We formally began proceedings with our traditional Citizenship Ceremony, presided over by Judge Barbara Seal.  CJAD's Dan Laxer and Dr. Laurie Betito were terrific emcees. There were 40 new Canadian citizens sworn in from 17 different countries. 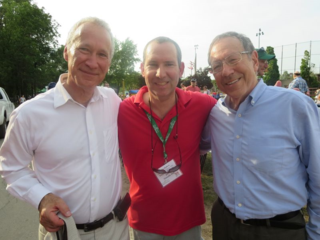 With Birnbaum and Cotler.

Plenty of games for the kids were in place and the pedal boats had a lineup a mile long. Scotiabank Westminster sponsored our always popular Canada Day cupcakes. Their representative, investment and personal banking specialist Yannick Haim Amar, is a relatively new resident of District 2. People lined up at the different concessions and took test drives with some vehicles from Gravel Auto, which donated $10 per test to three local charities.

Airport 77 and Lorraine Klaasen  provided superb musical entertainment. The late Nelson Mandela was inducted into our Human Rights Walkway. Mount Royal Liberal MP Irwin Cotler, who was one of Mandela's counsels when he was incarcerated in South African prison for 27 years, spoke about how Mandela emerged as a metamorphasis and a message behind the struggle for human rights of our time. Mandela, of course, presided over the dismantling of apartheid  and at the age of 75 became his country's president. Cotler attended his funeral last December. Dierdre Viljoen, Minister (Plenipotentiary) of the South African High Commission in Canada, drove into Montreal especially to attend our ceremony. 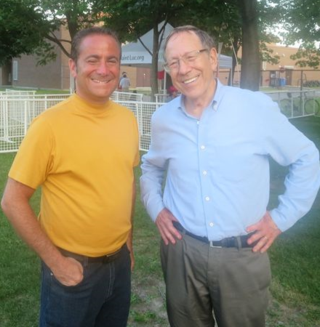 We honoured former D'Arcy McGee Liberal MNA Lawrence Bergman for his stellar 18 years of representation for our community in Quebec City by naming our main chalet at Trudeau Park in his honour. Lawrence was showered with well deserved cheers for his nearly two decades of devoted service to the constituents of D'Arcy McGee. As Mayor Anthony Housefather rightfully said, it was Lawrence who stepped in and saved our Emergency Medical Services from being torn apart by the provincial government. And when we needed the province to take part in funding our $18 million Aquatic and Community Centre (ACC), he stepped up to the plate again. 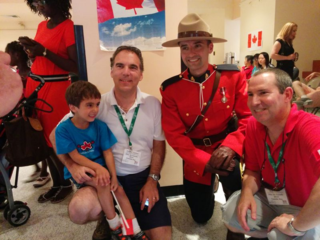 With Councillor Glenn Nashen, his son Jeremy and our representative from the RCMP.

Thanks as well to our invaluable Volunteer Citizens on Patrol (VCOPs) and our team of EMS volunteers.

We were all very worried about the forecast for throughout most of the day it looked very much like rain might fall. That did not happen. It was an absolutely perfect night at a time when MNA Birnbaum could deliver the message from our new premier, who can declare quite openly: "Happy Canada Day!"