A Côte Saint-Luc District 2 information meeting will take place on Monday, June 2 (7:30 p.m.) at City Hall (5801 Cavendish Boulevard). I created this initiative when I was first elected in the fall of 2005 as a way to maintain closer relations with constituents and talk mainly about issues related to the surrounding neighbourhood. Since then a number of other councillors have followed suit.

Special guests for this meeting will be Mayor Anthony Housefather, Police Station 9 Lieutenant Bryan Cunningham and Coordinator of Urban Development Eric Ibey. Mathew Stein (pictured), a District 2 resident and student at Bialik High School, will be presented with an Award of Merit for his efforts in cleaning up his neighbourhood. 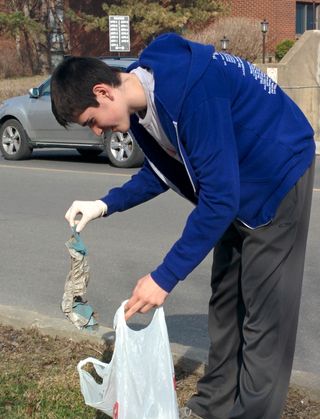 As the city’s point man for  traffic issues, Ibey will be soliciting any ideas citizens may have to improve the situation at Cavendish and Kildare. There will also be information on a planned Hydro-Québec project on Merrimac Road and Rembrandt Avenue, an update on the soon to be unveiled renovated Rembrandt Park tennis court, animal protection and other issues. This is also an opportunity for residents to bring up any other issue they wish.  For more information, call (514) 485-6945 or email mcohen@cotesaintluc.org.

All residents of Côte Saint-Luc are invited to attend. 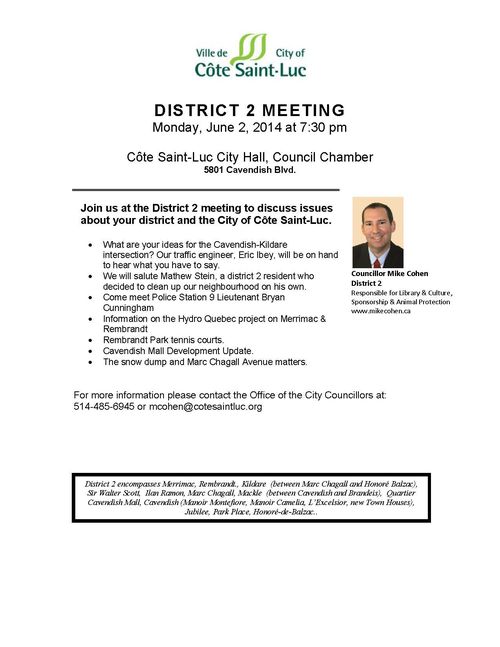 Great Guy! He surely deserves the Award of Merit. He's a good example to others especially the young ones to really follow and observe segragation of wastes. As for the Cavendish bld. and Keldare as well as Rembrant, well,I can suggest that there will be a color coding of cars, trucks and other vehicles to ease the traffic.