As the city councillor responsible for Animal Protection, I was pleased to hold my first forum on the subject at the Eleanor London Côte Saint-Luc Public Library. It was really the first time that a joint meeting had been held between cat and dog owners.

I was very pleased to welcome our newly elected Liberal Member of the National Assembly for D’Arcy McGee David Birnbaum, who succeeded Lawrence Bergman. David has been named a Parliamentary Secretary to Premier Philippe Couillard. We are thrilled to once again have a local MNA who is part of the government in power. 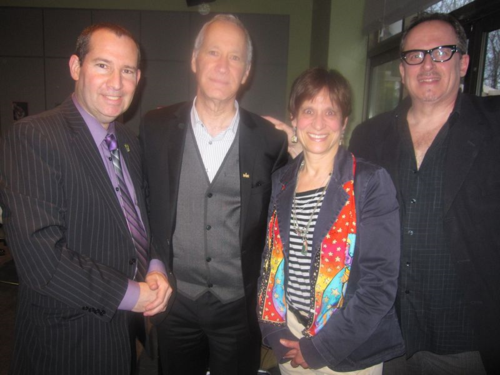 Lawrence Bergman was  a strong supporter of the Côte Saint-Luc Cats Committee (CSLCC). David told us that he has always been an animal lover, having grown up with pets in his household. He was very pleased to learn about our activities. We asked if he could speak with the new Minister of Agriculture, Pierre Paradis, who has responsibility for Animal Welfare. While we will sit down with David in the near future to brief him on our goals and objectives, we would very much appreciate meeting Mr. Paradis as well.

I have known David for a long time. We are lucky to have him as our new provincial representative.

A number of members of our CSLCC were on hand for the meeting, our two leaders Shelley Schecter and Diane Mendel Liebling. It has been almost four years since I called a meeting at City Hall to talk about what we could do to address the homeless cats situation in our community. Well more than 100 people turned out that evening and the rest is history. We have a small, but devoted, group of volunteers who handle Trap, Neuter, Release and Adoption, community relations, education, fundraising and other matters that come up.  Overall we have already saved the lives of hundreds of beautiful cats. The first ever cat licensing bylaw has been passed and we have many more projects at hand.

I was pleased with the turnout for our Forum, particularly among dog owners. There was a clear interest among those on hand to try and launch a Côte Saint-Luc Dog Owners Association. I would indeed support such an initiative, with these individuals serving as the perfect advisory group for my portfolio.

Since being appointed as the councillor responsible for Animal Protection last January, I have already met and spoken with countless dog owners. I will soon be announcing an exciting new partnership with a local pet food store.

Right now we have one dog run in Côte Saint-Luc, on Mackle Road near Caldwell. The city has already received a petition to see a new dog run built at Richard Schwartz Park, located on Westluke and Côte Saint-Luc Road near Meadowbrook Golf Course.  We are studying this request seriously to determine whether we can find a suitable section of land at that park or anywhere in the vicinity to suit that purpose. Dog owners near Decarie Square have a similar request.

It was clear from everyone on hand that we need to promote responsible dog ownership. That means keeping your canine on a leash and most importantly picking up after he or she. Never leave the house without a plastic bag to dispose of the dog’s dirty business. We are working towards a project which would have more bag dispensers available, with a trash can at the same location.

One lady told the story of someone in her building who refused to pick up after her dog. “I warned her that if she did not do so, I would put it in a bag and leave it on her doorstep,” she said. “Well right in front of me she let her dog do his business, with no cleanup at all. The next day she did find it on her doorstep.”

Steve Stein said he has been disgusted by some of the actions of irresponsible dog owners. “I have never seen such neglect,” he said. “My 16 year old son finally saw enough and he has taken to cleaning up the mess himself as part of his community service at school.”

Shelley Schecter said that the Hochelaga-Maisonneuve borough in Monteal now has a bylaw which requires dog owners to carry  a bag with them or else they risk a fine.

Bram Eisenthal, the publisher of Precious Pets newspaper, announced a new partnership with the CSLCC. We will be co-sponsoring some of his Grief Counselling meetings for people whose beloved pets have died. He has done a few sessions already on the West Island. They have been very therapeutic for those in attendance. I have personally lost three cats in my lifetime. Only a pet owner can understand what this is like. Absolutely devastating! Bram is giving people a chance to share their feelings with others who have gone through the same thing. A future meeting will take place in CSL.

I look forward to reporting upon developments on the formation of a Dog Owners Association. Louise Chenevert, who has started such a group in Montreal West, was on hand at our meeting and provide some good background on the subject.