The annual Victory in Europe (V-E) Day commemoration will  takes place on Sunday, April 27 at 11 am at Veterans Park, next to Côte Saint-Luc City Hall on Cavendish Boulevard. That same evening, Yom Hashoah will be held at the Tifereth Beth David Jerusalem Congregation on Baily Road in CSL.

In attendance at VE Day will be members of the Brigadier Frederick Kisch Branch 97 of the Royal Canadian Legion, Mayor Anthony Housefather, members of our Côte Saint-Luc city council, dignitaries, veterans and residents. 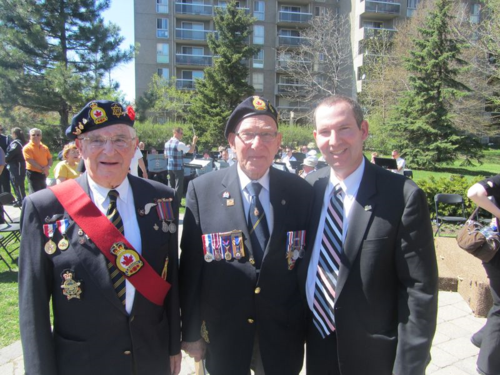 Meeting with veterans at last year's ceremony.
“It is important to express our gratitude to the men and women who have fought to liberate Europe,” said Ruth Kovac, who is the co-chairperson of this event with Councillor Allan J. Levine. “Our veterans also ended the genocide against the Jewish population of Europe and others targeted by the Nazis. Attending this ceremony is a concrete and visible manner to honour them.”
Victory in Europe (V-E) Day was May 8, 1945, the date when the Second World War Allies formally accepted the unconditional surrender of the armed forces of Nazi Germany. The cenotaph at Veterans Park honours the memory of those who gave their lives in the First World War, the Second World War and the Korean War.
“I encourage everyone to come on April 27 and show support for our veterans who still continue to do so much for our community and look after their own,” Councillor Levine said. “Every November during the annual Poppy Fund Campaign, the veterans sit for hours in malls and grocery stores pinning endless poppies on endless lapels to collect funds. The monies collected are then returned to the community through donations to local organisations, such as the Mount Sinai Hospital Foundation, the Royal Victoria Hospital, the Jewish General Hospital, the Salvation Army, the Old Brewery Mission and many others.”
This year’s commemoration will be conducted by Brigadier Frederick Kisch Branch 97 President, Frank Levine.  In the event of rain, the ceremony will be held indoors at the City Hall.
Meanwhile, the  annual Yom Hashoah  community-wide commemoration,  organized by the Montreal Holocaust Memorial Centre,  perpetuates the memory of all those who were murdered during the Holocaust and honours those who survived. It reminds us of our collective responsibility to remember the Holocaust and to protect individuals and communities from oppression, hate, racism and discriminatory policies.

This year’s theme, 1944 – and the trains kept going, will speak to the horrific events of 1944 and as a sub-theme, honour the memory of the Jews of Hungary, most of whom were deported and murdered in the space of a few months during that year.