Home Categories Posts by email Search
Côte St. Luc Kosher moving storefronts, but business as usual leading up to Passover
The Esso station will rise again as a Shell

For my first two mandates as a city councillor in Côte Saint-Luc I was responsible for Inter-community Relations. As such I created a data base of community organizations and clubs operating within our city and organized meetings once or twice a year. This represented a great opportunithy to exchange information and make new contacts.

Mayor Anthony Housefather is now overseeing this dossier and on April 2 he called the first meeting of this mandate at City Hall. While we had a nice gathering of local representatives, I was pleased to invite newly elected Outremont Borough Councillor Mindy Pollak as a special guest. Last November she became the first Chasidic Jewish woman to be elected to public office in the history of Montreal. She would like to start such a process in Outremont where by local community groups reps meet.

Besides myself, Councillors Mitchell Brownstein, Ruth Kovac, Steven Erdelyi and Allan J. Levine were on hand. We spent a good part of the meeting talking about the April 7 provincial election. It was clear that everyone in the room is uncomfortable at the mere thought of the Parti Québecois being elected with a majority. 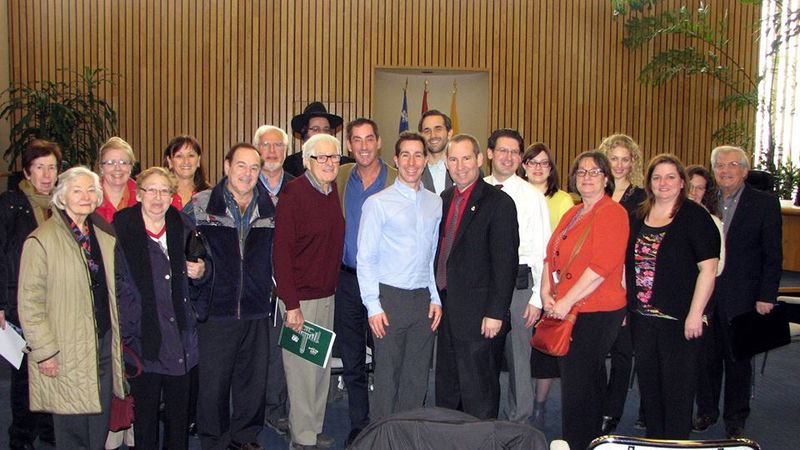 The best part of these meetings is when we go around the table and hear about what is new with the different organizations. Mount Sinai Hospital, for instance, will soon be opening two respite beds to give at-home caregivers a  break . Carol Steadman also reminded us that May 6 is World Asthma Day and special programming will be taking place at the hospital. St. Richard's Church, which recently marked its 50th anniversary, has published a colourful commemorative booklet and it is available for sale at the price of $10. Avi Satov, the vice-principal of Bialik High School, spoke about the current presentation of the musical Grease and an upcoming Cantorial Concert. Susan Grossman promoted Beth Israel Beth Aaron Congregation's upcoming raffle. Arnold Rosner from Canadian Magen David Adom  for Israel said that a new ambulance for Israel is being purchase in honour of Wolf Bronet, who at 91 years young is the leader of the  "Wolf Pack" of runners. Councillor Erdelyi, who is also the principal (and soon to be Head of School) at Solomon Schechter Academy, talked about a gala on May 29 which will honour outgoing chief Shimshon Hamerman. VE Day is April 27 at 11 a.m. at Veteran's Park next to City Hall and  on May 23, also at City Hall, we will have a lecture for students about the life of Nelson Mandela whose name will be inducted  in our Human Rights Walkway on Canada Day. Finally, Councillor Brownstein spoke about the CSL Dramatic Society's next musical called Catch Me If You Can in late May.