A couple of years ago I was delighted to learn that former NHL defenceman  Igor Kravchuk was a constituent of mine in Côte Saint-Luc District 2.  A few days ago I had a chance to meet another one of my constituents, Matt Cudzinowski, who has a pretty exciting job with the Montreal Canadiens. 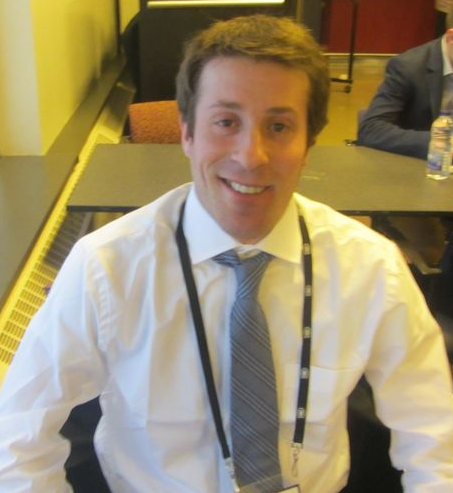 Matt, now 31,  attended both the Jewish People's and Peretz Schools (JPPS) and Bialik High School before  moving on to  Marianopolis College (DEC – Commerce), Concordia University (BA – Journalism) and the University of the Pacific – (BA - Sports Management) in Stockton, California.

When I was introduced, I knew his distinct name sounded familiar. Sure enough, he had done some on  air work for TSN 690 Radio.   Matt enjoyed  two major internships  with the Stockton Thunder of the East Coast Hockey League and the NHL's Detroit Red Wings.  He signed  on as the coordinator of  media and public relations for Golf Canada in Oakville, Ontario. before returning to Montreal and joining the Canadiens on January 30 2013.

Presently, Matt is the coordinator for HabsTV and Editorial.  He serves as a writer for the impressive  canadiens.com  website and CANADIENS Magazine.  "I cover the team both at home and on the road as part of a team of writers for our website," he says. "I also write feature stories for every issue of CANADIENS Magazine and I am also responsible for translation work, as well."

A dream job indeed for any hockey fan! No doubt some interesting stories to share if we bring back to speak at Bialik High School in the heart of District 2.