Commander Marc Cournoyer of neighbourhood Police Station (PDQ) 9, physically situated in Côte Saint-Luc District 2 at the corner of Cavendish and Kildare,honoured two volunteers by awarding them a Certificate of Merit.

Denise Cartier from the Fédération de l’âge d’or du Québec (FADOQ) was thanked for the many conferences she gave to the local  senior population while Jessica Znaty was recognized for her role in "Le soccer, la vie" of PDQ 9 and "Le mondial de soccer” of the Montreal Police Department. 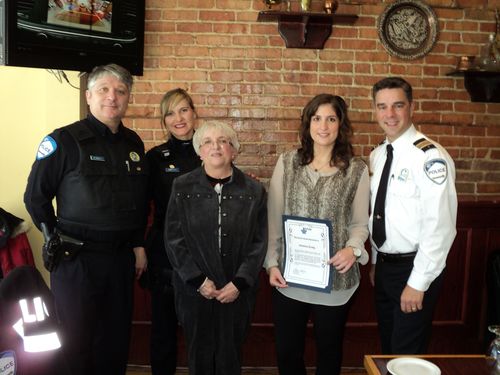 The commander and the two volunteers were accompanied by officers Vincent DeAngelis and Marie Christine Nobert, at the left of the picture.