Successful CSL protest against the proposed Quebec Charter of "Shame"

Hundreds of people gathered outside  Côte Saint-Luc City Hall on December 2 for a morale lifting rally for religious freedom.

The rally itself was preceded by a Christmas tree lighting event with Father Peter Laviolette of Saint Richard’s Church of Côte Saint-Luc. Following the event, there was the traditional Chanukah menorah lighting with Rabbi Mendel Raskin of Chabad of Côte Saint-Luc.

This was a “feel good event” as guest speakers spoke out loudly against draft Bill 60, the proposed Charter of Quebec Values. 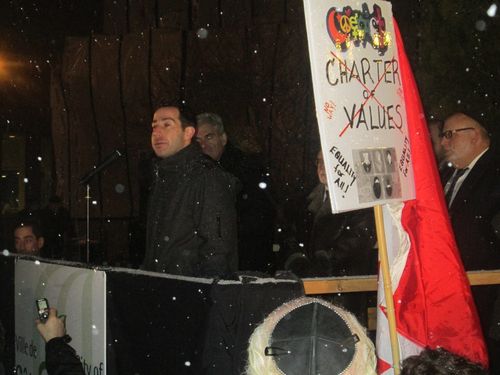 After opening remarks from Father Laviolette, the St. Richard’s Choir sang some Christmas tunes. They surprised us all with an improvised, “We wish you a Merry Chanukah!”

Rabbi Reuben J. Poupko  of Congregation Beth Israel Beth Aaron would later remark, “I am glad they did not sing Silent Night.”

Mayor Housfather called Bill 60 “an odious law,” and then put his own spin on former Canadian Prime Minister Pierre Elliott Trudeau’s famous quote that the state has no business in the bedrooms of Canadians, noting how Quebec “has no place in the wardrobe of the nation.”

Mount Royal Liberal MP Irwin Cotler was unable to attend the rally, but he sent a message calling Bill 60 “the Charter of shame.”

Added Mayor Housefather: “ If god forbid this law is ever adopted we will go the courts. We will never discipline anyone because they wear a hijab, a kippa or a crucifix.”

Mayor Steinberg declared this his town will not enforce the Charter, if it is ever adopted. "Immigrants from all over the world have fled tyranny and racial strife to come to Quebec," he said. "They came here for freedom and democracy. They came to a place where they could express their religious beliefs without fear of persecution or discrimination. If Bill 60 – the Charter of Shame - becomes law, Quebec will no longer be that place. This odious Bill contains provisions to eliminate minority rights, to restrict freedom of religion and freedom of expression. The Charter of Human Rights and Freedoms will be amended so that these basic freedoms can be removed. We cannot allow that to happen. We must stand up and say no.

"The CAQ says that it is OK to ban religious symbols on authority figures like police, judges, and prosecutors. The Quebec Liberal Party now says that they might agree with that view. Well, they are wrong. What you put on your head does not suddenly make you unqualified or biased.  To force those who do these jobs to choose between their religious beliefs and their employment is immoral. Support for any part of Bill 60 fans the flames of racism and intolerance. I call upon the CAQ and the Quebec Liberal Party to stand up and just say no to Bill 60.  The Town of Hampstead will not recognize it as a valid law. We will not comply. We will not be complicit with hatred, racism and intolerance."

Mayor Masella acknowledged that while our communities have not elected PQ MNAs, “we need to tell the CAQ and the Liberals that there is no common ground here.”

Rabbi Steinmetz referred to the Charter of darkness. “It is destructive and divisive,” commented the spiritual leader of Tifereth Beth David Jerusalem Congregation.  “It is stirring up an awful lot of animosity in our community. It is a solution to a problem that does not exist. This is cheap demagoguery; a ploy to get better results at the ballot box.”

Rabbi Steinmetz said that he was never before reticent to be in certain parts of Quebec outside of Montreal wearing his kippa until now. “We are here not just to oppose it Bill 60, but to deny its legitimacy,” he said. “We will never respect this law. If it is ever passed, we will deny it and undermine it. We will act with civil disobedience and follow the lead of the Jewish General Hospital.”

Rabbi Poupko said that the Charter  is a repudiation of Quebec history. He accused the PQ government of  trying to divert attention from the economy. “The definition of a democracy is when minority rights are protected by law,”  he said.

After the rally, the large crowd moved over to the large menorah where Chabad officials first showed a video of how Chanukah is celebrated around the world with political leaders. Rabbi Mendel Raskin, just back from his native Casablanca, Morocco, looked around at the dozens of cars with Chanukah menorahs on top and smiled at the tradition which Côte Saint-Luc has made sure continues each year. Councillor Glenn J. Nashen then climbed aboard a truck with a lift and manually lit the shamash and six candles. Bravo Glenn!

Here is the video: