The City of Côte Saint-Luc commemorated  Remembrance Day with a small ceremony at our very own Veterans Park on November 11. Leading up to this date, members of the Canadian Legion Brigadier Kisch Branch #97 visited schools and community groups. They also could be scene at neighbourhood stores and locales selling poppies.  Of course, the Legion's significant event each year is held to mark VE Day, when favorable  weather conditions generally prevail.

Jessica Laventure,  the superb weather forecaster/reporter for the Global Television Morning News, broadcast live from Legion headquarters from 6 a.m. to 9 a.m. Jessica sat with Legion president Frank J. Levine (both pictured below) and over the course of several segments, he shared with her some fascinating stories of his experience during World War II. Here is one of the segments. 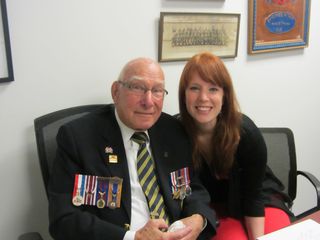 Also in Côte Saint-Luc, the Marymount Adult Education Centre held its first Remembrance Day ceremony since relocating to our community a number of years ago. Congratulations to Principal Cynthia Koomas, Vice-Principal Joan MacMillan (the initiator of the event) and their team for a job well done. Marymount caters to adult students, mainly new immigrants, studying English as  a Second Language. They also have 20 classes of special needs students.

The program began with a piper from the Canadian Legion marching into the room with  senior staff and the two guest speakers. One student recited On Flander`s Field while another led the audience in the singing of O Canada.

Students and staff were treated to two firsthand accounts from war: one veteran from WWII, L. Hugh Martin,  and another from the Vietnam War, former English Montreal School Board commissioner Joseph Petraglia.

Mr. Martin joined the British Army in 1942.  He was called to enlist at that time. and was placed in an army division that worked with heavy weapons such as cannons and large guns.  Mr Martin went on from there to apply to a newly formed glider pilot regiment.  These glider planes, with no engines, were known as the “silent wings” and were used to bring supplies to their men.  But like all missions anything can be expected.   Mr. Martin shared some fascinating stories and even pulled out some maps and a model plain to better explain the situation. 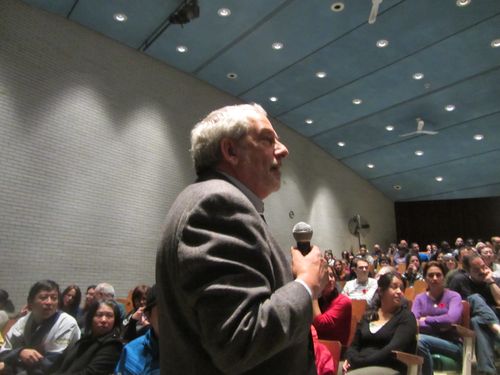 Mr.  Petraglia (pictured left) is  a native of Long Island, N.Y. He served as a platoon sergeant in the Vietnam War.  Back in the 70’s a platoon sergeant’s job was very different than it would be today. Today troops would have previously prepared dug in bunkers in the ground and have helicopter support.  Back then troops would walk all day, carry everything they owned on their backs, and dig out their own trench.

Mr. Petraglia suffered a permanent hearing loss as a result of his two combat tours of duty.  He said that the war and his military experience, "had a profound effect on his whole life, mostly for the better. The military teaches you duty, honour, country. The success in my life has come partly because of my military service." 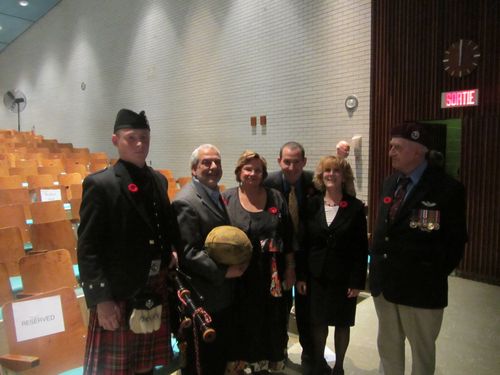 Mr. Petraglia brought his combat helmet and passed it around the room. Students had many questions, such as whether he was ever injured. Except for his hearing loss, caused by the constant sound of gunfire in one particular 24 hour period, Mr. Petraglia said that he was once shot near the knee by neither he nor any of his platoon members suffered anything serious. “I had two tours of duty in Vietnam and I am fortunate to have never lost any members of my troops,” said Mr. Petraglia, who received a bronze star for bravery. Pictured above I join the piper, Mr. Petraglia, Ms. Koomas, Ms.MacMillan and Mr. Martin.