The Shaare Zion Lions are the 2013 Champions of the MSSL (Montreal Synagogue Softball League) for the fifth year in a row. In a thrilling and exciting two out of three final series against the TBDJays, the Lions lost the first game 5-4 to a younger and hungrier Jays team. With their backs to the wall, the Lions came from behind and took Game Two 13-10. And in the sudden death Game Three final at Trudeau Park in Côte Saint-Luc, the Lions battled the Jays and emerged victorious in a 11-9 win. 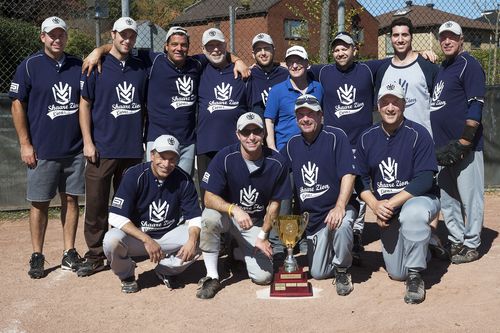 “We were an average team all year as many of our regulars were out with injuries” said manager/player Asher Tannenbaum. “But we stuck together, played smart and are thrilled with this fifth championship. We can claim to be The Montreal Canadiens of Softball and will return next year to win the sixth.”

The MSSL was created about seven years ago and there are eight synagogue teams in the league. Games are played on Sunday mornings from June through September.

For more information, please contact the Commissioner Asher Tannenbaum at reverend@shaarezion.org or514-481-7727#237

I do not know if it's just me or if perhaps everybody else encountering issues with your blog. It seems like some of the written text in your content are running off the screen. Can somebody else please provide feedback and let me know if this is happening to them as well? This may be a issue with my internet browser because I've had this happen previously. Many thanks

This text is priceless. How can I find out more?