With the municipal elections in Quebec just a few weeks, can we really stomach a provincial vote on December 9? Well it is certainly looking like Premier Pauline Marois will pull the trigger on one for that date, with the hope that she has winning conditions on her side.

For the voters in the riding of D’Arcy McGee, which emcompasses Côte Saint-Luc, Hampstead and part of NDG, it is comforting to know that long-time MNA Lawrence Bergman will be back as a candidate whenever Marois sends us back to the polls. There was cautious optimism at his nomination meeting at the Adath Israel Congregation on October 16 that the Liberals might be returned to power. Bergman sounded confident and so did two of his colleagues – MNAs and former cabinet ministers Pierre Arcand and Jean-Marc Fournier. John Parisella, the architect behind past provincial Liberal success stories, was a keynote speaker. He focused his talk on key Liberal values.

It is clear that with their divisive Charter of Values, the PQ wants to create a rift in the province. They have used this clearly xenophobic tactic to draw attention away from their poor economic performance, with an attempt to woo voters who agree that a ban on religious symbols is a good idea.  The proposed charter would ban public servants from wearing kippahs, hijabs, or larger-than-average crosses. 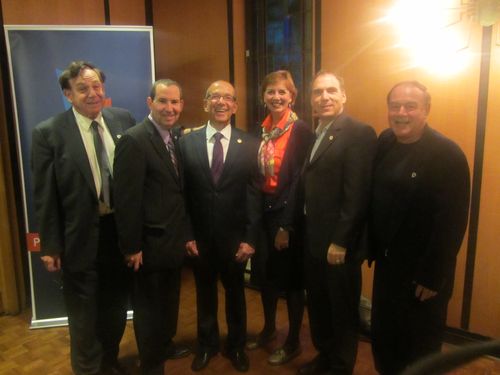 Councillors Goldbloom, myself, Berku, Nashen and Levine with Bergman.

Mayor Anthony Housefather was away on business, but he did send this message of support: “I am so sorry that work obligations have not allowed me to be at your nomination meeting tonight, but I want to express my strong support for your candidacy and my profound appreciation for your work as an MNA.  We have worked together since I was first elected a councillor and you were first elected an MNA 19 years ago.  Throughout that entire period you have been a friend and a mentor and someone who has taught me so much about what politics should truly be about which is doing good things for the people you represent and society as a whole.  As mayor of Côte Saint-Luc I can only say that you have been there at every step of the way to support our municipality and its 34,000 residents.  Whether it was securing funding for the construction of our fabulous new Aquatic and Community Centre, assisting us in getting legislation enacted to protect our exemplary EMS first responder service, helping us work on safety in our rail yards or lobbying for the Cavendish extension,  you have always been there for us.  In the last year since the PQ was elected you have been at the forefront assisting us in opposing the mean spirited Bill 14 and the horrendous Charter of Quebec Values, both of which attacked our rights and freedoms.  I am very proud to call you my MNA and D’Arcy McGee is extremely lucky to have you represent us in the National Assembly. I wish you the best of success and will be there every step of the way to support you and the Liberal Party in the next Quebec election.”

Hampstead Councillors Bonnie Feigenbaum (candidate for mayor), Michael Goldwax and Leon Elfassy were on hand. So was Russell Copeman, a former Liberal MNA and now a candidate for borough mayor in NDG-Côte des Neiges and the man who currently holds that title, Darlington District Councillor Lionel Perez. District 2 resident Martin Bogante, who presided over the local riding association for 18 years, was clearly a relaxed observer. New Police Station 9 Commander Marc Cournoyer made an appearance as did Senator Leo Kolber. Mark Bergman, with wife Sara and adorable seven year old daughter Mollie, was on hand. The MNA’s son, best known as the brand director and drive home show host on Virgin Radio, raced home from the end of shift to salute his dad. 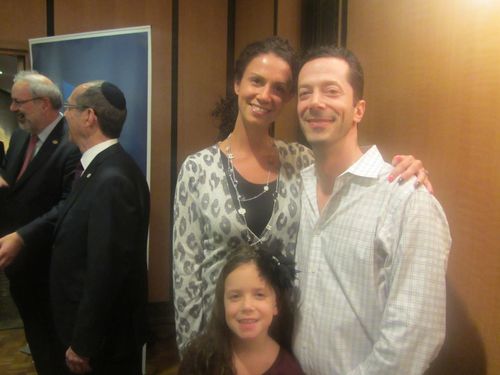 Bergman had very warm words for the woman in his life, Viviane Konigsberg. Bergman’s wife Monica passed away from cancer over a decade ago. He remained single for many years. Viviane is with him at all public events. He called her “my deep love of my life...my companion.”

Fournier ripped into the PQ’s record. “They were supposed to have a zero deficit and instead it is a $2 billion deficit,” he said. “Nobody is happy that the economy is headed in the wrong direction. If they call us for an election, we are going to have to define the kind of society we want. Being united is the only way our society will be better.”

On the eve of his 73rd birthday, Bergman showed that he still has plenty of fire in his belly. The de facto “Minister of Jewish Affairs” stated to much applause, “for the sake of all of Quebec we need a change in government.” He went on to accuse the PQ of wanting to institute state sponsored discrimination.

Added Bergman: “How many times have I said that all Quebecers, those born here and those who decided to come to our shores, are equal no matter what the colour of our skin, their origin and the society that they come from? We are all equals as Quebecers and Canadians. Unfortunately the present government wants to break with that premise.”

Wow, awesome blog layout! How long have you been blogging for? you make blogging look easy. The overall look of your site is magnificent, let alone the content!

I'm extremely impressed with your writing skills as well as with the layout on your blog. Is this a paid theme or did you modify it yourself? Anyway keep up the excellent quality writing, it's rare to see a great blog like this one nowadays.