Côte Saint-Luc Mayor Anthony Housefather (pictured poolside below) has been proudly representing Canada at the Maccabiah Games (a.k.a. the Jewish Olympics) in Israel. As a member of the Canadian master's swim team, he has won seven medals : five silvers in the 100 and 400  metre butterfly, the 50 metre backstroke, open water and  the medley relay .  He also captured a bronze in the 200 metre freestyle while being part of relay team which also captured a bronze. 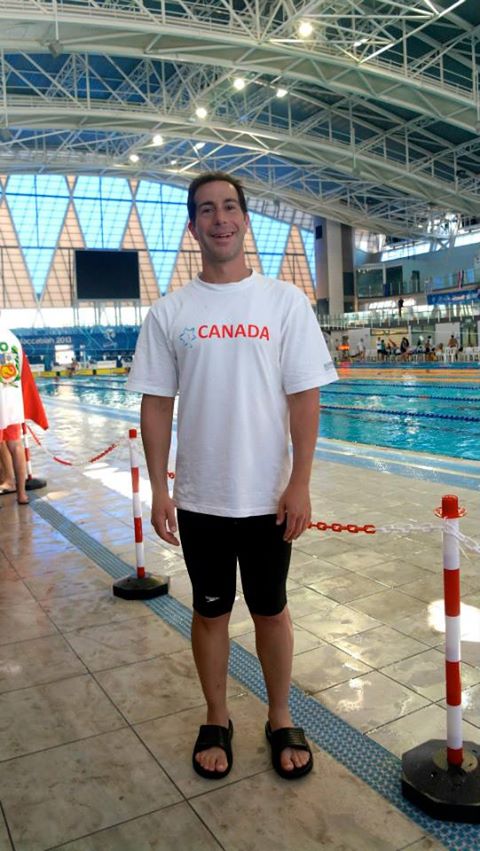 “My times have been generally very good and very pleased,” said the mayor, who missed a gold by four tenths of a second in the 400 metre freestyle.

The final  tally from the pool is eight medals (five individual silvers, one individual bronze and two relay bronze. Clearly the mayor is Canada’s answer to Michael Phelps.  “Our team manager believes this was the most medals won by a Canadian in the games so far so very pleased,” the mayor added.

Men's Volleyball: In the gold medal game in Modi'in, Canada fell to Israel in straight sets (3-0). The guys fought hard, but in the end the U-21 team (for the most part) from Israel was just too strong. The pro-Canadian crowd - our rugby, Jr. girls volleyball, Jr. boys baseball teams and hundreds of other Canadians were in attendance — definitely showed their support with chants of CA-NA-DA filling the gym throughout the match. The team's showing was the best finish by a Canadian men's volleyball team in Maccabiah Games history.

Master's Tennis: The wins kept coming for Canada on the tennis courts yesterday. In Masters Singles, Sherry Buller finished off her Russian opponent to set herself up with a Gold medal match on Sunday. Bram Faber dominated his match and will go for Gold on Sunday as well. In Mixed Doubles, Sherry Buller was at it again and did not disappoint. She and her partner Adam Fisher won 2 consecutive matches to bring home another Gold medal for Canada.

Silver on the Diamond. After an epic win against Israel in the semi-finals the day before, Canada's Junior Boys Baseball team came up short against USA in the gold medal game losing 9-0. The boys had a great tournament and the crowd at yesterday's game was definitely proud of their silver medal accomplishment.

Soccer Update: The Open Women's team rebounded from its tough loss on Thursday against Israel with a resounding 7-0 win over Germany. For complete soccer results, check out www.maccabiah.com.

Basketball Update: On Friday, many of our hoops team hit the court. Here are there results: U16 Boys beat Brazil 44-42; Master's Men's team fell to USA 80-75; and Open Men's team lost to Israel 110-75. Our Open Women's team will play for Bronze eitherSunday or Monday (yet to be determined).

Hi, i read your blog from time to time and i own a similar one and i was just wondering if you get a lot of spam remarks? If so how do you reduce it, any plugin or anything you can suggest? I get so much lately it's driving me crazy so any assistance is very much appreciated.

Do you have a spam problem on this website; I also am a blogger, and I was wondering your situation; we have developed some nice procedures and we are looking to trade solutions with other folks, please shoot me an email if interested.

Really when someone doesn't be aware of then its up to other users that they will help, so here it happens.

I like the helpful info you provide in your articles. I'll bookmark your blog and check again here frequently. I am quite certain I'll learn many new stuff right here! Best of luck for the next!

My brother suggested I may like this web site. He used to be totally right. This put up actually made my day. You cann't imagine just how so much time I had spent for this info! Thanks!