Before I was first elected some eight years ago as the Côte Saint-Luc city councillor for District 2, I pledged to invite my constituents to an annual meeting to discuss issues pertinent to our specific area. These District meetings have been very successful and while they typically occur in June, I do call others when necessary. You see for me, it is not enough to simply knock on doors every four years when  an election is called.

My latest District 2 meeting took place on June 3, 2013 at City Hall and I am pleased to say the room was full.  Among my special guests were Mayor Anthony Housefather, Police Commander Sylvain Bissonnette,  Manager of Engineering Mohammed Ali and Howard Liebman, the chief of staff for Mount Royal Liberal MP Irwin Cotler. 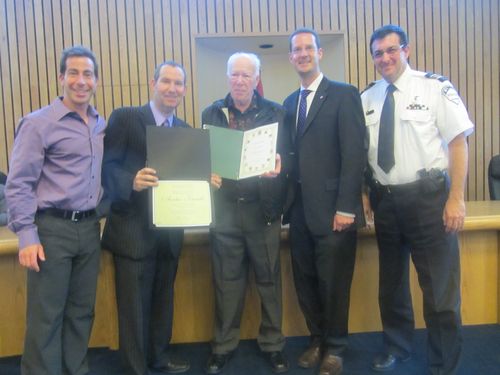 I was pleased to honour Archie Kwiatt, the dedicated crossing guard at the super busy intersection of Cavendish and Kildare.  While we presented him with a certificate of merit, Mr. Liebman also came forward with a beautiful certificate of his own from MP Cotler. It was a fitting tribute to a man who makes our pedestrians feel safe. I will soon be accompanying Archie on some of his shifts, something I have done in the past, to gain a better perspective of our traffic issues there.

Mayor Housefather spoke passionately about the PQ government's Bill 14, legislation aimed at toughening up our language laws and how the municipalities have waged a successful battle so far to preserve the bilingual status of communities like Côte Saint-Luc. He also put into perspective rezoning measures that were taken to allow for a very small commercial establishment on Marc Chagall Avenue between Beth Chabad and the Snow Dump. He indicated that  there will soon be a call for offers and the highest bidder would be given the opportunity to buy the land. What someone can build is restricted. This could be a pharmacy or a bakery for instance plus professional offices on the second floor. We already had  a public consultation meeting, explaining to Marc Chagall Avenue residents that we will be grassing over the land between the new townhouses and the Bellagio, with the hope of eventually relocating Isadore Goldberg Park (now located between the Sir Walter Scott/Kildare Road apartment buildings) there. We opened a register at City Hall for the rezoning and nobody signed in against it. We will now wait to see how the bidding process goes. This should begin in late summer. The mayor also spoke in very positive terms about the new housing development and his hopes that the newly dubbed "The Avenue" will ultimately become our version of NDG's Monkland Avenue.

I introduced Commander Bissonnette, who told us that he has now headed Police Station 9 for six  years. This is interesting considering that his arrival on the scene coincided with a plan by the Montreal Police to close the station down. "I was supposed to be here for four to six months and then the station would close," he recalled.

"But we saved it," the mayor intervened.

The Commander was pleased to report that criminal activity is down in the district, which also includes Hampstead and Montreal West. His station pays a lot of attention to traffic infractions at key intersections like Cavendish and Kildare.

I announced that Hydro-Québec will be undertaking major work on Merrimac and Rembrandt in 2014. The snow dump has been cut down in size and vehicle infractions involving Bialik parents are dramatically down thanks to the cooperation of school officials and Commander Bissonnette's team. The tennis courts at Rembrand Park will be refurbished in the fall and new lighting installed.

When I opened the floor to questions, there were a flood of them related to Cavendish and Kildare. The mayor did note that this council has undertaken a series of measures to try and improve the situation, This includes the synchronization of  lights and the double left turn on Cavendish and Fleet, the double left turn on Kildare turning on to Cavendish, different wait times at that same spot depending upon the time of day and a decision to retain the services of a crossing guard at our own expense.There were some good suggestions about how to improve pedestrian safety and Mr. Ali took note of all of them.

I very much enjoy holding these Town Hall style meetings. The next municipal election is on November 3 and I raring to go to seek my third mandate. For me, though, preparations for that vote began the day after the last one - in 2009. A big thanks to Phil Matlin for playing piano as people entered the room.

Here is a video of Phil and Archie.

Today, I went to the beach front with my children. I found a sea shell and gave it to my 4 year old daughter and said "You can hear the ocean if you put this to your ear." She placed the shell to her ear and screamed. There was a hermit crab inside and it pinched her ear. She never wants to go back! LoL I know this is completely off topic but I had to tell someone!

I know this site presents quality based articles and other data, is there any other website which provides such stuff in quality?