CSL honours its volunteers at Fiddler on the Roof gala

Councillor Sam Goldbloom and I were proud to co-chair the 2013 Côte Saint-Luc Volunteer Appreciation Evening. Working with our amazing Parks and Recreation Staff and Department of Public Affairs and Communications, we decided to do something a little different this year and take advantage of the newest jewel in our community, the Côte Saint-Luc Dramatic Society. Volunteers were invited to a delicious buffet dinner catered by Ernie at the Aquatic and Community Centre, followed by an exclusive presentation of Fiddler on the Roof across the street at the Giovanni Palatucci Facility.

Thanks to Parks and Recreation Director David Taveroff, 41 year veteran of that team Harold "Kid" Cammy and their staff, Public Safety Director Jordy Reichson, Public Affairs and Communications Director Darryl Levine and Councillor Ruth Kovac for their significant contributions to our committee work.

Over the years we have honoured our volunteers at gala dinners and brunches.  This new format was an unqualified success, with more than 200 people attending. It was my second time seeing the Dramatic Society's version of Fiddler and I loved every moment of it. When we presented our various awards, two of our councillors, Mitchell Brownstein and Sam Goldbloom, joined the mayor and the rest of council on stage in costume. Mitch plays Lazar Wolf while Sam portays the Innkeeper. Mayor Anthony Housefather has a cameo as a priest, with Taveroff as his understudy.

Councillor Dida Berku had a surprise at the reception, presenting Mayor Housefather with a Queen's Diamond Jubilee Medal. 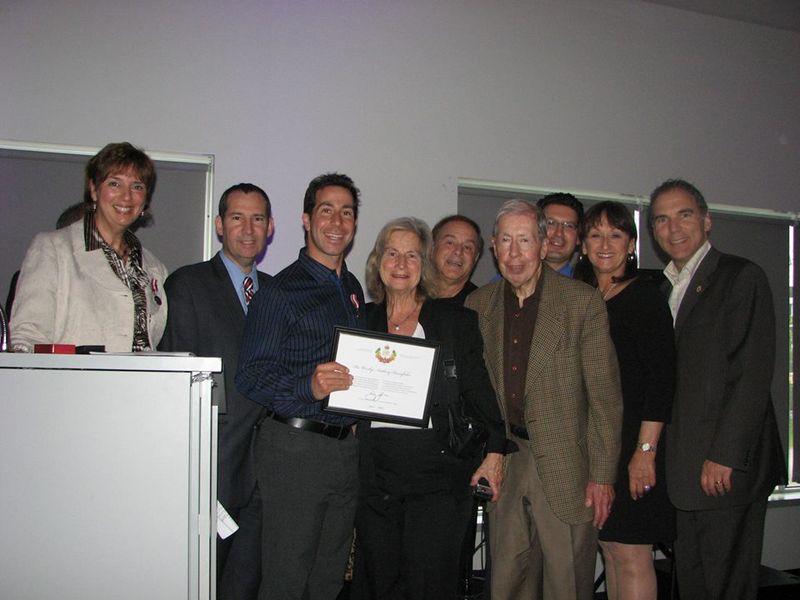 Recognizes a volunteer couple for exceptional contribution to the community special events programs;


Louise Ferland and Sam Pinsky have been an integral part of Côte Saint-Luc activities for more than thirty years. Louise served the residents during her thirty year career as a manager responsible for various Parks and Recreation programs such as Figure Skating, Learn to Skate, the Ski Club, etc. Once her career was over, she continued in a volunteer capacity working on various special events such as Canada Day, Maisons Fleuries and the ever so popular annual Winter Carnival Valentine Dance. Meanwhile, Sam started his volunteer career more than three decades ago, in sports, volunteering in various hockey and baseball programs. More recently, Sam has been a driving force with Louise  volunteering at our annual special events programs.

Recognizes a volunteer for their exceptional contribution to the Parks and Recreation special events programs;

Ron Yarin is a fixture around the sports facilities in Côte Saint-Luc. He has been involved in a volunteer capacity since the late 1970’s and continues to serve the community year ‘round. Ron works diligently with both youth and adult sports leagues, volunteers in the vCOP program, and has excelled in our special events programs such as the annual Carnival Dance and the Garage Sale.

Recognizes the Youth Volunteer of the Year , a “leader of tomorrow”, for outstanding efforts in making a difference in Cote Saint-Luc through volunteer activities.

Ariel Sterlin is an outstanding example of young leadership in her community.  She is a talented dancer and actor with years of training and experience behind her that belie her youth.  She has trained in Ballet and Jazz throughout her life and is also trained in gymnastics.  Using her gifts to give back to the community, Ariel voluntarily taught both ballet and gymnastics to children throughout her high school career.  Last summer, unable to participate as a performer in the Côte Saint-Luc Dramatic Society’s (CSLDS) production of Office Hours, Ariel volunteered countless hours as the production’s stage manager, a very demanding job with a massive amount of responsibility.  This year, Ariel has managed to continue a high standard of education at CEGEP while starring as the titular roll of Hamlette in the Dawson Theatre Collective’s production of the same name, as well as working with the CSLDS once more, this time as Assistant Choreographer and playing the role of Bielke, Tevye’s youngest daughter.  She is a joy to work with, a credit to her community and we are positive has a very bright future ahead of her.

Recognizes a volunteer for their exceptional contribution to the City’s socio-cultural programs;

Gayle Cohen is recognized in volunteering her time and efforts to the library’s Bright Lights Film Club program. Gayle has been most instrumental to the program’s success since its beginning in 2009. She brings to it not only a passionate regard for film but also a formal degree in its study having earned a BFA in Film Studies from Concordia University. In doing so she has selected provocative, innovative and challenging films; provided extensive, thoroughly-researched, pre-screening introductions to educate, contextualize and elucidate such work (often unfamiliar to the program’s attendees); before leading lively group discussions after the viewing of each film. Many doubted the viability of such a unique program but Gayle has not only proven them wrong but engendered a spiritual, intellectual and artistic richness by which the citizens of Cote Saint Luc have greatly prospered.

Recognizes a volunteer for their exceptional contribution to the Community Services Programs. 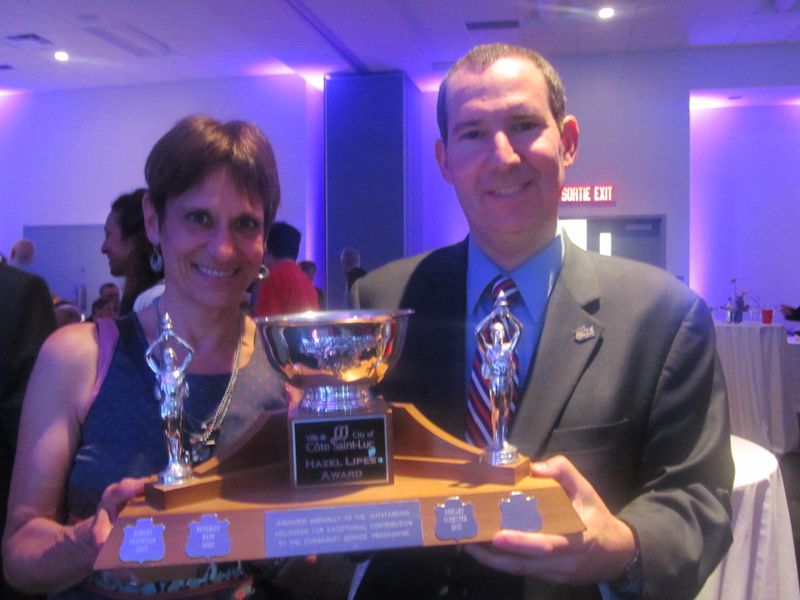 Shelley Schecter (above with me)  is the inspiration behind the Côte Saint-Luc Cats Committee, responsible for its Trap, Neuter, Release and Adopt Program. She has dedicated her life towards animal welfare and as the founder of Educhat, she is called upon by individuals across the province for assistance in rescuing homeless cats. Without Shelley's leadership, our volunteer committee would not have the tremendous success rate it has attained in the three years since its formation.

Joseph Raie has dedicated much of his life to the Côte Saint-Luc Minor Sports programs. He presided over our Minor Hockey Association and at the present time oversees the Youth Hockey League and the Senior Softball League. Despite some health setbacks, Joe never let this stand in his way.

Ambassador of the Year

Michael Kutz was 11 years old when the Germans rounded up the Jews of Nieswitche, Poland and transported them en masse to open pits where they were to be slaughtered. By a quirk of fate, Kutz was knocked unconscious and left for dead. Later that night he awoke and escaped, and made his way to a convent. He ultimately joined the partisan forces in the area. Kutz is the recipient of countless community awards, and was presented with the Supreme Chancellor’s medal by the Supreme Lodge of the Knights of Pythias. He is also a member of the board of governors, board of directors and executive of the Montreal Holocaust Memorial Centre. Michael regular speaks to students, is a longstanding member of the Brigadier Kish Branch #97 and the Côte Saint-Luc Men's Club. He always represents our community with pride.

Sidney Margles was presented last fall with this trophy, recognizing the overall Volunteer of the Year. Sidney moved here from TMR about a decade ago and has made a significant impact in our community, particularly as president of a revitalized  CSL Men's Club. He is a resident of DIstrict 2 and a reliable source for me to turn to when necessary. Of course in his past life he was a councillor in the Town of Mount Royal and a noted broadcaster for CJAD.

It's really a nice and helpful piece of information. I'm glad that you simply shared this helpful info with us. Please keep us informed like this. Thank you for sharing.