VE Day ceremony in CSL: a wonderful tribute to our veterans

Members of the Brigadier Frederick Kisch Branch 97 of the Royal Canadian Legion, Mayor Anthony Housefather, the Côte Saint-Luc city council, dignitaries, veterans and residents  commemorated Victory in Europe (V-E) Day on Sunday, May 5 at Veterans Park. Weather conditions could not  have been more beautiful. 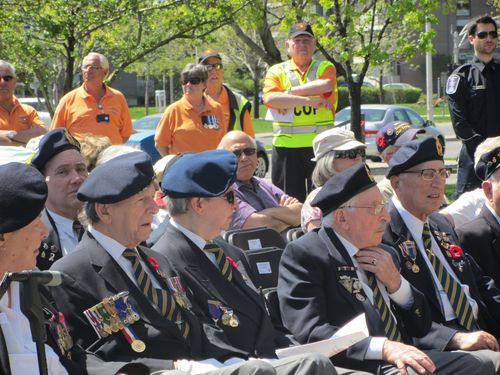 “My generation and those of my children and grandchildren will never be able to fully pay back the Canadian soldiers who fought to defeat tyranny during the Second World War,” said Ruth Kovac, who was   the co-chairperson of this event with Councillor Allan J. Levine. “By liberating Europe our veterans also ended the genocide against the Jewish population of Europe and others targeted by the Nazis.”
Councillor Levine said we must continue to honour those who have served and those families who lost loved ones for our country.
Victory in Europe (V-E) Day was May 8, 1945, the date when the Second World War Allies formally accepted the unconditional surrender of the armed forces of Nazi Germany. The cenotaph at Veterans Park honours the memory of those who gave their lives in the First World War, the Second World War and the Korean War. 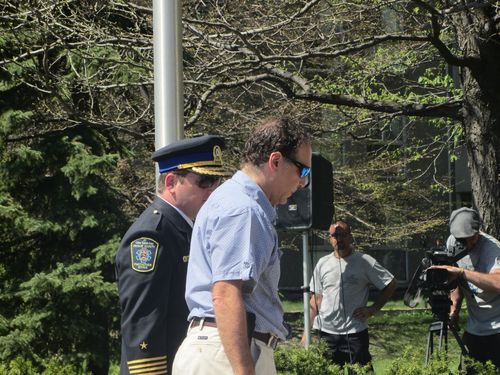 "For those present who have not experienced war I am glad you were spared that sorrow," said Frank Levine (pictured with me and Veteran Solomon Susser). "Unfortunately the world has not divested itself of dictators."
Bergman quite appropriately took a shot at the PQ government for the disrespect it has shown for our present-day military via Bill 14, proposed hardline amendments to our language law. Bergman reminded us how the PQ wants to prevent the children of Canadian soldiers based in Quebec from attending English schools.
For nine years  Liebman has run Cotler's riding office as chief of staff. Cotler was in Jerusalem to celebrate the Bat Mitzvah of his grand-daughter and also to receive a prestigious human rights award at the World Union of Progressive Judaism this morning.
"As Professor Cotler has signalled time and again over the past two years, an unspeakable battle rages today in Syria with close to 100,000 killed – before our very eyes," Liebman stated. " In Ahmadinejad`s Iran we continue to witness a four-fold threat – genocidal incitement; nuclear; global terrorism  -and we saw just this weekend a shipment of missiles from Iran to Hezbollah - and massive domestic repression against the peoples and publics of Iran.Professor Cotler rose again in Parliament last week to ask how the government of Canada could rise in Canadian Courts to invoke State Immunity to immunize Iran from the claims for redress of Canadian victims of Iranian state terror and torture thanks to a new law he has promoted for these victims. We can all be proud of the global leadership of our local MP – who was the driving force behind a unanimous report of the Foreign Affairs Committee adopted by our House of Commons on Iran – as he continues to work tirelessly to address this greatest of threats to international peace and security."