I finally saw the motion picture 42, the true story of how Jackie Robinson broke the colour barrier in Major League Baseball. When the film was over, some of those in the audience at the Quartier Cavendish Mall Theatre applauded. The movie was extraordinary and while I knew about the racism Robinson and others suffered, it was nonetheless disturbing  to see it portrayed so vividly on the large screen. Could this have really happened in our lifetime?

Well before I even knew the movie 42 was coming out, I had proposed to  my colleagues on Côte Saint-Luc City Council that we honour Jackie Robinson in our 2013 Human Rights Walkway Ceremony during Canada Day festivities. We will indeed be doing so. However, as prelude to this event, I felt it was vitally important that we incorporate  an educational component. My co-chair, Councillor Allan J. Levine, agreed. As a former school teacher of 35 years, mostly at Wagar High School, Allan knows that the story of Jackie Robinson needs to be in the classroom.

So I got to  work on a lecture, which we ended up holding on May 10 at City Hall. My good friend Jack Jedwab, the executive director of the Association of Canadian Studies and a Robinson historian agreed to join us. I timed the event specifically to coincide with a visit to town by former Expos star Warren Cromartie, now head of the Montreal Baseball Project. And then there was Kirmit Kitman. For many years my late father Larry would tell me stories about Kitman, an American who came here to play for the old Montreal Royals. From the pressbox we'd see Kitman in his box seats behind the Expos dugout. "He played with Jackie Robinson," Larry would say. 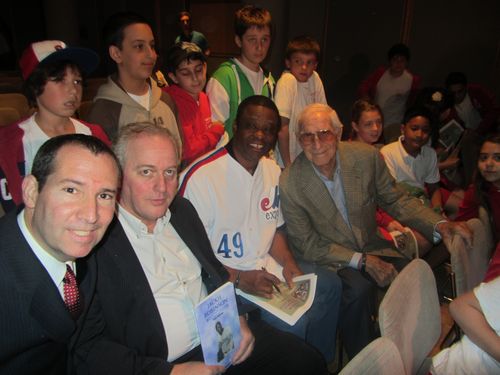 I tracked Kitman down and a 90 years of age he is still as sharp as can be. He also agreed to join the panel. It was now time to pick the students and I wanted cross-section from the public sector and the Jewish day school system. From the English Montreal School Board, representatives from Merton, Hampstead, Elizabeth Ballantyne and Coronation attended. They were joined by pupils from Hebrew Academy, United Talmud Torahs, Herzliah and Bialik's baseball team. Some members of the public attended, making for a packed house of some 200 people. I am pictured above with Jedwab, Cromartie, Kitman and some students.

This was a one hour living history lesson. Jedwab has always been interested in the Robinson story and organized many events about the trailblazing  sports icon. Immediately, Jedwab made such a powerful point. How could a country like the United States, which had fought the Nazis in Europe, practice racial segregation in their own land? As the son of a concentration camp survivor, Jedwab said he was motivated to speak about Robinson.

Kitman played two years for the Royals. He spent one entire training camp in Daytona Beach getting to know Robinson and seeing for himself the type of disturbing racism which existed. Cromartie was literally brought to tears after hearing Kitman's words. "If it was not for Jackie Robinson, there would be no athlete of colour playing any sport," he declared.

Mayor Anthony Housefather gave a stirring account of just what Robinson's debut in the majors did for blacks in sports while Councillor Levine later lashed out at our Quebec government for its own brand of targeting minorities, specifically proposed language legislation Bill 14.

I was thoroughly inspired by our lecture and so were the students and educators in the audience. It was why I asked my wife to join me at the theatre the following day to see 42. This is a film every student should see and when it comes out on DVD I will make such a push at the EMSB. Ideally, Black History Month 2014, would represent an excellent opportunity.

Cromatie, by the way, will be back here this summer giving a four week baseball school at our own Trudeau Park, with an additional two weeks added at another park in Ahuntsic. At our lecture, kids expressed a lot of interest in attending. Here is the flyer.

John Kenney of the  Montreal Gazette did this terrific video of the event:

Thanks for some other magnificent post. The place else may just anybody get that type of information in such a perfect approach of writing? I have a presentation subsequent week, and I am on the search for such information.