The annual Yom Hashoah commemoration was held  April 7 at  Congregation Tifereth Beth David Jerusalem on Baily Rd in  Côte-Saint-Luc). The ceremony helps to perpetuate the memory of all those who were murdered during the Holocaust, to honour the survivors. It reminds us of our collective responsibility to remember the Holocaust and to protect individuals and communities from oppression, hate, racism and discriminatory policies. This community-wide commemoration is  organized by the Montreal Holocaust Memorial Centre. 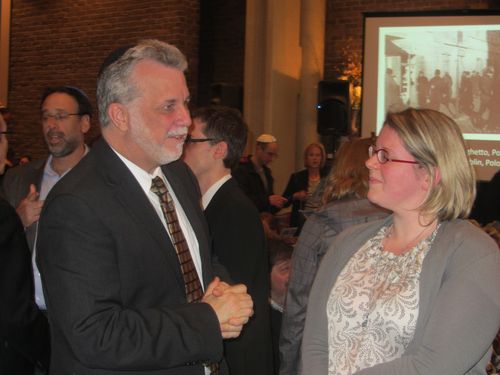 As usual, the sanctuary at the TBDJ was filled to capacity. Quebec Liberal MNA for D'Arcy McGee Lawrence Bergman was accompanied by his party's new leader, Philippe Couillard (pictured above). Mount Royal Liberal MP Irwin Cotler and Montreal Mayor Michael Applebaum were there, as was Projet Montréal leader Richard Bergeron and several members of council.  Other municipal politicians, including yours truly, were on hand as well

This year’s theme, 1943, the Year of Uprisings, honoured the courage of the many thousands of men and women who stood up against deportation and mass murder, risking their lives to initiate uprisings in ghettos (Warsaw, Bialystok, Lvov and others) and death camps (Treblinka and Sobibor, and others). Despite these acts of bravery, 1943 was a year of mass deportation and vast destruction of Jewish communities. 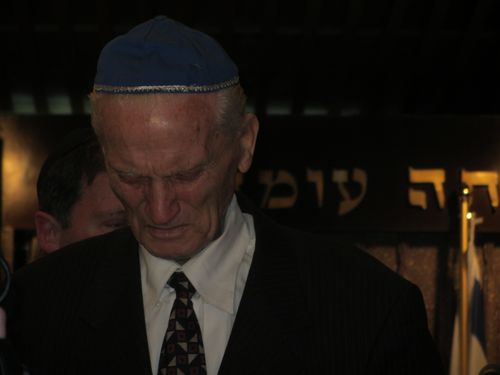 Six Montreal Holocaust survivors lit memorial candles, symbolizing the six million Jews murdered during World War II. They shared their memories of 1943 through short video testimonies.Jacob Lev (picture at the left)  broke down as he watched video testimony  about his life in the Warsaw Ghetto, how he smuggled food for his family as a young boy and about his life in a labour camp. Child survivor Yehudi Lindeman described how he was saved by his mother and other rescuers from deportation, living in hiding until liberation by Canadian soldiers.Leon Calderon shared the story of his deportation to Auschwitz-Birkenau from his native Salonika and how he was forced to clean up the Warsaw ghetto, with 100 Greek camp inmates, after the uprising.Musia Schwartz talked about her survival in Warsaw under a false identity as a Christian maid. Fela Ross described her life in the Lodz ghetto until her deportation to Auschwitz, from there to slave labour in Hamburg and finally to Bergen-Belsen where she was liberated.Baruch Spiegel, the last Montreal survivor involved in the Warsaw ghetto uprising, shared his memories of the fighters and his involvement in the uprising. He was  represented by his daughter, Mindy Spiegel, who lit the memorial candle on his behalf.

Joel Lion, the Consul General of Israel, spoke about his late grandfather who died in the Sobibor death camp."It is our duty to make sure that Jews will never be killed again because they are Jewish," he remarked. "The antisemitic beast is still alive."

It was a powerful experience to be part of. We are fortunate to have many survivors still with us, willing and able to tell their stories. At the conclusion of the evening all Holocaust survivors present were asked to rise. The numbers have dropped naturally over the years, but there was still a strong presence. Then the second generation were asked to rise and the numbers increased dramatically.

Excellent blog! Do you have any tips for aspiring writers? I'm planning to start my own site soon but I'm a little lost on everything. Would you suggest starting with a free plaatform like Wordpress or go for a paid option? There are so many options out there thyat I'm totally confused .. Any recommendations? Thanks!