The ageless Joe King, 89 years young and among the most active seniors  I know, addressed our Côte Saint-Luc Senior Men`s Club this week. I asked him to provide a summary of his address. 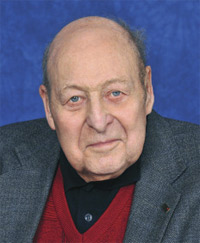 It was a strange, even foreign enclave, largely populated by colourfully-clad immigrants scrambling to make a living, as best they could, in this challenging new city.  To the west of The Main was the predominantly English world, to the east, the Francophones.

Life was a struggle for newcomers, even when they found work.  The biggest employer was the garment industry, where the working language often was Yiddish.   Even the foreman knew how to swear in Yiddish.  Newcomers would descend from vessels on the waterfront, be greeted by friends or family---walk up to what is now Chinatown—spend the night sleeping on the floor. (There were no guest rooms—or elevators—in the tenements.)  The next morning, with luck and connections, they would go to work in a factory.

For Montrealers, the most important Jew was Isaac Singer—but he never visited the city.  What he did was invent the popular Singer sewing machine—made a mint—and spent much of it on 19 wives.  The last one served as the model for the Lady with the Lamp in the Statue of Liberty.

Jews dominated the manufacturing of clothing --in Montreal, Toronto, New York.  Even during the depths of the Great Depression, in 1931, 83% of the  Jewish work force were employed in manufacturing.

Many young people went to work at age ten or eleven—selling newspapers or peddling.  One of the companies supplying them was Ogilvy’s—today a ritzy department store, but then advertising in Yiddish!

(For a few years, Yiddish was an official language in Montreal thanks to Mayor Mederic Martin)

Harry Hirschman had a great impact on the community.  In 1903, he gave the community its first Library—in the living room of his apartment.  The librarian was his wife—handling their few books and pamphlets after she returned home from work.

In 1922, Hirschman was one of three Canadians who journeyed to the Ukraine where more than 100,000 Jewish children had been orphaned.  His team managed to rescue and find homes, mostly in Montreal, for 163.  He returned home one day and introduced one of the orphans to his astonished wife.  “This is our daughter,” he said.  The daughter, in later years known as Mrs. Arnold (Feiga) Fisher, became chair of the women’s division of Combined Jewish Appeal and lived into her nineties.

Stores of the twenties reflected the meagre living circumstances of the time.  Virtually nothing was thrown away. Used clothing was hung outside the shops.  Barrows could be rented for 25 cents a day and they sold everything from vegetables and fruit to used shoes. Hermann Reitmann—who founded the Reitmann chain of stores—started out like that.

The scavenger for saleable items was the peddler with horse and wagon, making endless rounds crying out “any rags?”  Often the horses were old nags, treated with great kindness, but only months away from a glue factory.  During the bitter winters (much colder and longer than today), layers of old blankets and used overcoats adorned both horse and master.

The horse was also the family pet—the only one the family could afford.  It was a treat for younger children to be lifted onto the back of a bony old horse while father or grandfather fed the patient animal.

In 1922, the Protestant School Board breathed a collective sigh of relief.  They opened the Baron Byng High School on St. Urbain Street—smack in the middle of a significant proportion of Montreal’s Jews.  Never comfortable with having Jews in its schools, the Protestant leaders cheerfully assured each other that they had established a Jewish educational ghetto, as it were, and the Jews would be sidelined.

It didn’t work out that way.  Instead, each year, Baron Byng High topped the lists of educational achievements.

One roughneck tamed in the system was Izzie Lazarovitch (who was ultimately expelled ) whose life changed forever when an English teacher named Saunders read to his class from Tennyson:

“Sink me the ship, master gunner

Sink her, split her in twain

Fall into the hands of God

Not into the hands of Spain”

At that moment, Izzie Lazarovitch was transformed into Irving Layton, one of Canada’s greatest poets.

Graduate Simon Reisman won international acclaim as the man who conceived of and negotiated the Free Trade Agreement—overpowering his American opposite number with his fierce determination.  (Once, it is claimed, Simon became so angry that he snubbed out his cigar on an 18th century desk).  Reisman earned his high school tuition fees dishing out ice cream sodas.

(As a student, Goldenberg once encountered Prime Minister MacKenzie King in Ottawa and immediately advised the P-M on how he could do a better job.  Impressed, MacKenzie King invited Carl to have dinner with him.  “We just received lobsters from Prince Edward Island.”  “Thank you, but no.  They are not kosher.”)

Sydney Shulemsohn became a highly-decorated pilot, using his twin-engined Beaufighter to cannonade and rocket German warships and merchant vessels.  His leadership was so impressive that he was assigned to teach his attack techniques to scores of other pilots and led massive aerial attacks on Nazi targets.

Despite their achievements, the Jewish community faced widespread anti-Semitism.  One of the leading figures was McGill University’s Dean of Arts, Professor MacKay, who insisted that Jews would have to have higher scores before being admitted, on a limited basis, to the university.

In a way, it was poetic justice when McGill University—during the depression—found it financially impossible to continue operating its School of Social Work.  But two people came to the rescue—Gerald and Marjorie Bronfman—came to the rescue with a $50,000 gift.

Very nice post. I simply stumbled upon your blog and wanted to say that I have truly loved browasing your weblog posts. In aany case I will be subcribing on your rss feed aand I'm hoping you write once more soon!

Simply wish to say your article is as astounding. The clearness in your post is just nice and i could assume you're an expert on this subject. Fine with your permission allow me to grab your RSS feed to keep updated with forthcoming post. Thanks a million and please keep up the enjoyable work.

My partner and I stumbled over here different web address and thought I may as well check things out. I like what I ssee so now i'm following you. Look forward to looking at your web page again.

Good way of describing, and fastidious post to get facts regarding my presentation subject, which i am going to convey in college.

What a information of un-ambiguity and preserveness of precious knowledge regarding unexpected emotions.