A very happy 85th birthday to one of my favorite constituents Samuel Rappaport, who its the magic number on February 1.

From the moment I first began to campaign to become the city councillor for District 2 some eight years ago, Sam was in my corner. He went door to door with me at his condo and provided a great deal of insight into different traffic issues.

Sam worked as a buyer for the former Cumberland Drugs chain for more than two decades. Even in retirement, he sells cemetery monuments, goes to synagogue each morning, bowls and volunteers at the CLSC René-Cassin, Maimonides Geriatric Centre and Combined Jewish Appeal. He exercises at least twice a week.

Sam and his dynamic wife Doreen have been married for 29 years. They have four children and nine grandchildren, including Kim (pictured with Sam below). 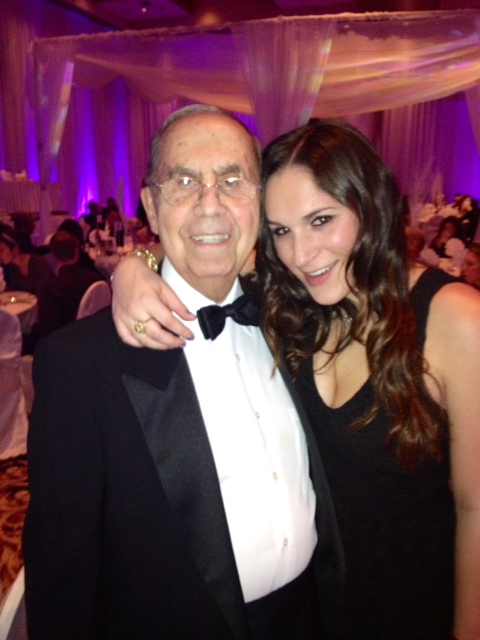 It's fantastic that you are getting thoughts from this article as well as from our dialogue made at this time.

Very good blog! Do you have any recommendations for aspiring writers? I'm planning to start my own website soon but I'm a little lost on everything. Would you recommend starting with a free platform like Wordpress or go for a paid option? There are so many choices out there that I'm totally overwhelmed .. Any suggestions? Thanks a lot!

I was suggested this website by my cousin. I'm not sure whether this post is written by him as nobody else know such detailed about my problem. You are amazing! Thanks!

I am in fact thankful to the holder of this website who has shared this fantastic paragraph at here.

I'm curious to find out what blog system you are working with? I'm experiencing some minor security problems with my latest blog and I'd like to find something more safeguarded. Do you have any solutions? http://www.georeverse.net/index.php?title=User:EarnestDawkins

Pretty! This was an extremely wonderful article. Many thanks for providing these details.

Quality posts is the main to be a focus for the users to pay a visit the website, that's what this website is providing.

Have you ever considered about adding a little bit more than just your articles? I mean, what you say is valuable and everything. Nevertheless imagine if you added some great visuals or videos to give your posts more, "pop"! Your content is excellent but with images and video clips, this blog could definitely be one of the very best in its field. Fantastic blog!

If some one wishes to be updated with hottest technologies therefore he must be pay a visit this web page and be up to date everyday.

Magnificent site. Lots of useful info here. I am sending it to several buddies ans additionally sharing in delicious. And certainly, thank you to your sweat!

Usually I do not read post on blogs, however I wish to say that this write-up very pressured me to check out and do it! Your writing style has been amazed me. Thanks, quite nice post.

Wow, this piece of writing is nice, my younger sister is analyzing these things, thus I am going to convey her.

Howdy! This is my 1st comment here so I just wanted to give a quick shout out and tell you I genuinely enjoy reading your blog posts. Can you suggest any other blogs/websites/forums that go over the same subjects? Appreciate it!

I don't even know how I ended up here, but I thought this post was good. I do not know who you are but definitely you're going to a famous blogger if you are not already ;) Cheers!

It's going to be end of mine day, however before ending I am reading this enormous paragraph to increase my knowledge.

I like what you guys are up too. This type of clever work and reporting! Keep up the excellent works guys I've added you guys to my blogroll.

Write more, thats all I have to say. Literally, it seems as though you relied on the video to make your point. You obviously know what youre talking about, why throw away your intelligence on just posting videos to your site when you could be giving us something enlightening to read?

You really make it appear so easy with your presentation but I find this topic to be actually one thing that I feel I'd never understand. It sort of feels too complicated and very wide for me. I am taking a look ahead in your next publish, I'll try to get the dangle of it!

Because the admin of this web site is working, no doubt very quickly it will be well-known, due to its feature contents.

Really when someone doesn't know afterward its up to other viewers that they will help, so here it occurs.

Ahaa, its good discussion regarding this post here at this website, I have read all that, so at this time me also commenting here.

Greate article. Keep posting such kind of info on your page. Im really impressed by your site. Hello there, You have performed an incredible job. I'll definitely digg it and in my view recommend to my friends. I'm sure they will be benefited from this website.

Pretty nice post. I just stumbled upon your blog and wished to say that I've really enjoyed surfing around your blog posts. In any case I'll be subscribing to your feed and I hope you write again soon!

I have been surfing online more than 2 hours today, yet I never found any interesting article like yours. It's pretty worth enough for me. Personally, if all webmasters and bloggers made good content as you did, the net will be a lot more useful than ever before.