On the eve of Black History Month I was pleased to announce that the City of Côte Saint-Luc will induct Jackie Robinson to our Human Rights Walkway on July 1, 2013 during the Canada Day celebrations at Pierre Elliott Trudeau Park. Councillor Allan J. Levine will co-chair this program with me. 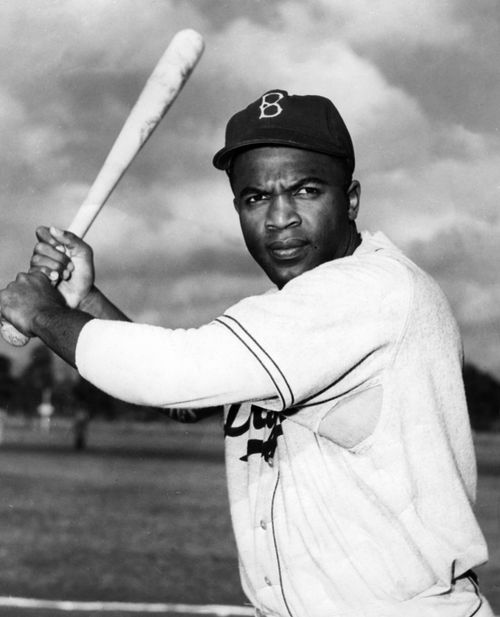 “Although the understanding of racial equality has advanced a great deal since Jackie Robinson broke the major league colour barrier, his achievements in advancing tolerance and understanding through the world of sport deserves to be honoured,” Mayor Anthony Housefather said.

Although there had been African American baseball players as late as the 1880s in the professional leagues, the teams that made up professional baseball eventually agreed unofficially to stop using black players. In November 1945, the Brooklyn Dodgers General Manager Branch Rickey broke with convention and signed Robinson to a contract. Robinson played for Dodger’s triple-A team, the Montreal Royals in 1946. He debuted with the Dodgers in 1947 and was selected as the Rookie of the Year. Robinson was the National League’s Most Valuable player in 1949, and helped the Dodgers win the World Series in 1955. He was inducted into the Baseball Hall of Fame in 1962.

Having been involved in the sports world all of my life I cannot remember a time when black athletes did not make up a high percentage of major leaguers, But you only need to go back 60 years to know a time when there were no black players in Major League Baseball. Jackie Robinson changed history in a tangible way.

Councillor Levine said he hopes that local schools will find a way to bring Robinson’s inspiring life story part of the classroom curriculum, beginning in February, which is Black History Month in Canada. The Eleanor London Côte Saint-Luc Public Library will present a formal display of books about Jackie Robinson during the month of February.

Hollywood will also pay homage to Robinson this year with the release in April of the motion picture “42”, starring Harrison Ford as Dodgers owner Branch Rickey and Chadwick Boseman as Robinson.

Former Montreal Expo Warren Cromartie, and president of the Montreal Baseball Project, will partner with us to honour Robinson. He is scheduled to attend the ceremony on July 1, 2013. More details on the event will be released as the event approaches.

Thank you, I have just been looking for info approximately this subject for ages and yours is the best I have found out till now. But, what concerning the conclusion? Are you certain in regards to the supply?

I am really loving the theme/design of your web site. Do you ever run into any web browser compatibility problems? A small number of my blog readers have complained about my website not operating correctly in Explorer but looks great in Chrome. Do you have any ideas to help fix this issue?

Immediately after you have had surgery, you can out consume the procedure. Make positive you only drink wholesome smoothies for excess weight decline and spend notice to the sugar content material in the drink.

Very good blog post. I certainly love this site. Keep it up!

An impressive share! I've just forwarded this onto a co-worker who was conducting a little homework on this. And he in fact ordered me dinner due to the fact that I found it for him... lol. So allow me to reword this.... Thank YOU for the meal!! But yeah, thanx for spending time to talk about this topic here on your website.

hi!,I really like your writing very a lot! percentage we be in contact more about your article on AOL? I need an expert in this area to unravel my problem. May be that is you! Having a look ahead to peer you.

Quality posts is the key to be a focus for the visitors to visit the web site, that's what this web page is providing.

I always emailed this webpage post page to all my friends, for the reason that if like to read it after that my friends will too.

It's amazing to pay a quick visit this site and reading the views of all colleagues on the topic of this piece of writing, while I am also keen of getting experience.

Hi mates, fastidious piece of writing and good urging commented here, I am actually enjoying by these.

It's actually very complex in this full of activity life to listen news on Television, therefore I just use internet for that reason, and get the newest information.

Howdy, i read your blog from time to time and i own a similar one and i was just curious if you get a lot of spam feedback? If so how do you protect against it, any plugin or anything you can suggest? I get so much lately it's driving me crazy so any support is very much appreciated.

Hi there, after reading this awesome piece of writing i am also delighted to share my familiarity here with mates.

Fabulous, what a website it is! This weblog gives valuable facts to us, keep it up.

Hello to all, the contents present at this website are in fact amazing for people knowledge, well, keep up the nice work fellows.

Hi there, just wanted to say, I liked this post. It was helpful. Keep on posting!

Thank you for the good writeup. It in fact was a amusement account it. Look advanced to more added agreeable from you! By the way, how could we communicate?

Ridiculous story there. What occurred after? Take care!

Hi! Do you know if they make any plugins to assist with Search Engine Optimization? I'm trying to get my blog to rank for some targeted keywords but I'm not seeing very good results. If you know of any please share. Many thanks!

I'm extremely impressed with your writing skills and also with the layout on your weblog. Is this a paid theme or did you modify it yourself? Either way keep up the nice quality writing, it is rare to see a nice blog like this one nowadays.

Great web site you've got here.. It's hard to find good quality writing like yours these days. I really appreciate people like you! Take care!!

You could definitely see your enthusiasm in the work you write. The world hopes for even more passionate writers such as you who are not afraid to say how they believe. All the time follow your heart.

It's difficult to find educated people for this topic, however, you seem like you know what you're talking about! Thanks

I like the valuable info you supply on your articles. I will bookmark your weblog and check once more right here regularly. I am moderately certain I'll learn plenty of new stuff right right here! Good luck for the next!